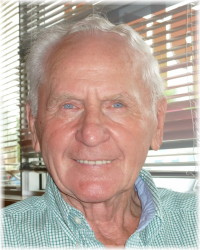 Peacefully, surrounded by his family, Lawrence passed away at the age of 89 years after a courageous battle with cancer. He will be missed dearly by his loving family. Lawrence is survived by his wife, Ruth, his three children, Malcolm, Alan (Sharon) and Penny (John.) Lawrence leaves behind his five grandchildren, Marina and Mitchel, Cody, Joshua and Jewel (Mathew). Lawrence is also survived by his siblings Harvey, Jerry, Irwin, Ruby and Evelyn.

Lawrence was born on January 20, 1931 to Karl and Natalie Topnik. Lawrence was the seventh of fourteen children and grew up working on the family farm in Greenwald. At the age of 13, he began working in a bush camp cutting pulp with his brother.

In 1953, Lawrence met the love of his life, Ruth. They would later wed in 1955 and spend an amazing 65 years together. They would have three children, Malcolm, Alan and Penny and raised them in Fairford, MB after Lawrence and Ruth purchased what would become “Topnik’s General Store”.  It was here that Lawrence and Ruth taught their children the many life lessons they would need to prepare them for their lives. He spent countless hours in the store, creating lifelong friendships with members of the community for many years until retirement.

Lawrence had a passion for airplanes. In 1978, he achieved his lifelong dream and obtained his private pilot license and purchased his very own Cessna 150. He enjoyed the peacefulness and serenity of flying. He loved taking family members up in the air which often included taking grandchildren along in their car seats.

Lawrence and Ruth spent many days dancing together. Folk and old-time dancing were their specialties. They danced their way around the province and were often admired and complimented on their precise footwork.

Lawrence loved his music. He played both the violin and guitar and always enjoyed a good toe tapping polka. Even in his last days, he was still tapping his toes when we played music for him. He brought the music to our whole family. He will always be the reason we tap our toes or whistle along to a song we like.

Family gatherings were his favourite. Lawrence always made sure there was more than enough food for Granny to cook and enjoyed being surrounded by his loved ones. He always put his family first. He was our welcoming committee, eagerly waiting by the front door to greet each family member as they arrived.

Lawrence loved his grandchildren, often playing little jokes. He could always be heard with his infectious laugh after playing his pranks. Known for his quick wit and sense of humor Lawrence embodied something special that blessed this earth for all who were lucky enough to know him.

Lawrence was a fighter, even right up to his last day. His life motto of “you can’t lay down and die” proved just how strong he was.  In 1950, while cutting pulp, he was mistaken for a deer by a hunter and was shot. In his later years, he survived not one, but two heart surgeries. Lawrence was the strongest man his family knew.

The family would like to thank Dr. Partyka at the Beausejour hospital for his excellent care and compassion, cardiologist Dr. Rohit Singal, the countless nurses, home care workers, neighbours, members of the community and all those who prayed for our Lawrence.

A memorial service is planned for Tuesday, June 23rd at 2:00pm at Sobering Funeral Chapel, 1035 Park Avenue E., Beausejour. Interment will follow in the Beausejour Cemetery. Due to Covid-19, attendance in the chapel is limited to family and close friends. Outside attendance is welcome in the parking lot. All are welcome to attend the interment. Social distancing guidelines will be implemented at all locations.

In lieu of flowers, donations may be made in Lawrence’s memory to Beausejour Hospital TV Fund, Box 1614, Beausejour, MB, R0E 0C0.

Offer Condolence for the family of Lawrence Topnik