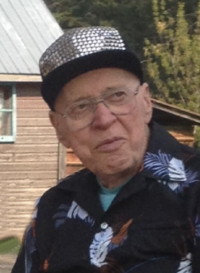 It is with great sadness that we announce the peaceful passing of Leo Hastmann Sr. on September 25th, 2016 at his home on the Hastmann homestead, with his family by his side.  Left to cherish his memory are his wife of 53 years Gertraud(Gerty); his children August, Alma(Marcel), Erna, Leo(Sheila), David(Lisa); grandchildren Amanda, Trevor, Michael, Melaine, Brittany, Katie, Alexander; great-grandchildren, Jonathan, Alyson, Hannah,  Bennett, Rylan, Ethan; sister-in-law Erna Goron(late Edmund), brother-in-law Offried Gurske (Alina),  many nieces, nephews, cousins and dear friends. He was overjoyed to be Opa to his grandchildren and great-grandchildren. He also enjoyed time spent with friends, old and new.

A quiet, devoted family man with a deep faith in God, he was the last surviving of 11 siblings.  He was born and lived his entire life on the Hastmann homestead in Brokenhead. You could always count on him to have a great story to tell of days gone by. His word and a handshake were all you needed to seal a deal!

In addition to farming, he worked various jobs in his lifetime. Once retired from his 17-year career as a carpenter at the Milner Ridge Air Force Base, he enjoyed being home at the farm, gardening, and cutting wood in the bush (Bunker Hill). He always remembered to bring two sandwiches, one for himself and one for the bear!

He and his wife traveled extensively, especially in his later years. They traveled throughout Canada, Europe, the USA, and Japan to visit his daughter Erna when she was teaching there.

He will be greatly missed by all who knew him. The family would like to extend sincere thanks to all those who cared for Leo in hospital and to homecare who made his wish to be at home for his final days possible.

Offer Condolence for the family of Leo Hastmann Sr.