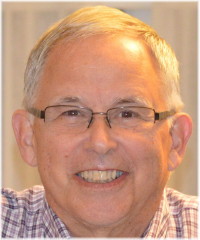 On Tuesday, November 10, 2020 Leonard Angus Simpson died peacefully at his home in Pinawa, surrounded by his family.  Len is survived by his wife Judith and his three children, Jane (Brad), Andrew (Susan) and Richard (Kristen), his precious grandchildren Rhiannon, Josh, Alaina, Erik, Hayden, Niah and Nathan and his sisters-in-law Sian and June.  He was predeceased by his parents, Wesley Simpson and Kathleen Simpson, and his brother David.

Len was born in Vancouver, B.C. and studied at the University of British Columbia.  He graduated with a B.Sc. (Physics) followed by an M.Sc. in Metallurgy. While at university he joined the University Navy Training Division and enjoyed ocean-going adventures and made many life-long friends.  Following graduation, he worked at the General Electric Labs in Schenectady, New York before moving to the U.K. to pursue a Ph.D. at the University of Wales, Swansea. It was there he met his future wife Judith. In 1968 the next big move was to the Whiteshell Laboratories in Pinawa to pursue research in material science.  Len remained at the Whiteshell Labs, in various research and managing positions, including Director of the Reactor Safety Research Division, until his retirement in 1996.  The highlight of his time at AECL was working with the scientists and technicians in his division.  They were some of the most brilliant and innovative people he had ever come across.

Following his retirement, he became the mayor of Pinawa and spent eight years carefully guiding the town of Pinawa through the decommissioning negotiations with Atomic Energy of Canada.

His passion was sailing on Lake of the Woods, and he, Judith and Jane, Andrew and Richard spent many years enjoying the lake and the friendship of other sailors.  In 1995 Len was diagnosed with prostate cancer and spent the next 25 years managing his illness but at the same time living life to the fullest.  His strength has impressed many, especially his family.  He loved opera, the Jets,

X-country skiing and living in Pinawa.  Most of all he loved his wife, his children and his grandchildren.  We will miss him so much.

Len was grateful for the compassionate care he received from Dr. Czaykowski, Dr. Bruneau, Dr. Papetti and the Pinawa Cancer Clinic.  His favourite charity is CancerCare Manitoba.  Celebrations of his life will be held when all is calm, and our lives can start again.

And one clear call for me

And may there be no moaning of the bar

As I put out to sea. (Tennison)

Offer Condolence for the family of Leonard Angus Simpson