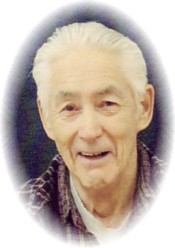 Bud passed away peacefully in his sleep, in the early morning on Tuesday, April 13, 2010 after complications from diabetes.

Bud was born on May 21, 1929 in Hodgson, MB. He was an only child and was orphaned before he was ten years old and adopted by his Uncle Harry and Aunt Louise Hodgson. Aunt Louise became more of a Mother to him than an Aunt. Throughout his life, even as an older adult she was always very near and dear to his heart.

A memorial service will be held at 11:00 a.m. on Tuesday, April 20 at the Whitemouth Community Hall with Pastor Greg Junghans officiating.

The family wishes to thank all the staff at the Whitemouth Personal Care home. Bud resided there since September, 2008. Thank you to all the staff that helped him adjust to life there and contributed to his comfort and care in the last days and hours before his passing.

In lieu of flowers, donations can be made to the Canadian Diabetes Association, 200 – 310 Broadway, Winnipeg, Manitoba R3C 0S6.

Offer Condolence for the family of Louis Gaspard (Bud) DeLaronde