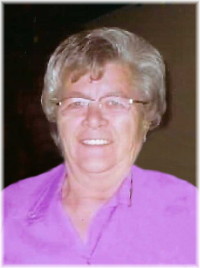 After a courageous battle against cancer, our beloved wife, mom, grandma, great-grandma, sister and aunt, Louise lost her battle at the Health Sciences Centre in Winnipeg.

Louise was born on March 11, 1942 on the homestead in St. Ouens, Manitoba to Ernestine and Wilhelm Zielke.

She grew up on the farm where she learnt the value of hard work and while working caught the eye of her lifelong husband Gordon who she spent 62 1/2 happy loving years with.

She worked alongside of her husband on their dairy operation in Julius, Manitoba where they raised their family. She went on in her later years once her family was grown to work as a nurse’s aide at East Gate Lodge in Beausejour, Manitoba for a number of years before retiring.  She was known at East Gate for her compassion and gentleness when caring for the elderly.  Many times, she received special request to sit and comfort the elderly as they passed on.

Once retired she had the opportunity to do some travelling.  She was amazed at her first sight of the mountains in British Columbia as she was awed by the sight of Niagara Falls. She along with her husband also did some air travel but was happiest just being at home spending time with family and friends.

One of her favorite past times was doing puzzles.  She could sit for endless hours working on beautiful scenic puzzles, then glazing and gifting her favorites.

She was a wonderful and patient wife, mother, grandmother and ultimately great-grandmother who will be missed beyond measure.

The family would like to extend a “Thank you” to the staff at both the Beausejour Hospital and Health Sciences Centre for the comfort and care provided in her final hours.

Offer Condolence for the family of Louise Pommer