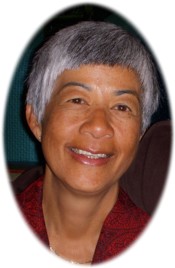 It is with the deepest sorrow that we announce the passing of Lou Howes, our wife, mother, and grandmother. She died peacefully on Thursday, May 26, 2011 after a 5 year battle with cancer.

Lou was born in Camiling, Philippines on March 28, 1947. She was predeceased by her parents Balbino and Juanita Mamaat. She grew up in Baguio City, Philippines where she is survived by her two brothers Mariano and Rolly, her sister Gloria, and numerous nieces and nephews. She will be missed beyond measure by her husband Darrell, her son David (Heidi) and grandsons Max and Liam, and her daughter Janine (Howard Tse) and grandchildren Donovan, Benjamin, and Molly.

After graduating as a nurse, Lou bravely immigrated to Canada where she gained employment as an Operating Room nurse at St. Anthony’s General Hospital in The Pas. It was in The Pas where she met Darrell, the man of her dreams. They were married on May 1, 1971. After David and Janine were born in 1974 and 1975, Lou took a brief time off work and then nursed part time so that she could devote more time to raising a family.
When Lou and Darrell retired in 2002, they moved to Pinawa where they both “swung hammers and toted lumber” to build their retirement home.

Lou was a happy, energetic, kind person who would pursue with passion anything that sparked her interest, from gardening, to cooking, to bowling, to ukulele playing, to curling, but most especially to golfing. Lou was a loving wife and mother, a loyal friend to many, and a woman of great faith. She loved life and lived it to the fullest. With a smile and a cheery ‘hello’, she lit up any room she entered. All who knew her were touched by her sense of humour, her courage, her generosity, and her devotion to her family and friends.

If friends so desire, donations to the Canadian Cancer Society or a charity of choice would be appreciated by Lou’s family.

Offer Condolence for the family of LOURDES HOWES