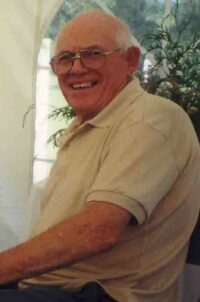 It is with mixed emotions that we announce the passing of Ludger Jubinville on November 15th. Our father had an incredible long life with excellent health for his 102 years of life, living independently until the age of 100. We will miss his warm smile, kindness and knack of telling corny jokes.

Ludger was born Dec. 31st, 1919. Dad always related to his birth as being an early New Year’s baby and following the years. He was the oldest (12 siblings) of the family of Xavier and Simone Jubinville. Ludger is survived by sisters, Tilly Gauthier and Rita Gilmore.

LJ married the love of his life Berthe Langill July 29, 1942. They shared a beautiful marriage for 64 years. Ludger and Berthe, who passed in 2006, raised 9 children, all of whom have survived him. David (Myrna); Gerard (Betty-d); Colette (Terry-d); Ronald (Peggy-d); Stella; Roger (Mona); Daniel; Simone (Randy) and Edgar (Denise). As expected with large families, there are 24 grandchildren, 18 great-grandchildren and 2 great-great-grandchildren.

Ludger volunteered and served with the Air Force during WW2. Stationed at Goose Bay, Labrador he serviced the warplanes that fuelled at the most eastern point in Canada before takeoff to ferry men and materials to the European war theater.

Ludger and Berthe lived in Letellier, MB. in the early years. This was not far from the family farm near St. Joseph.

After the war Ludger worked as a mechanic for Fraser and Empson. The work consisted mostly of servicing the machinery for the local farmers. We’ve heard the story about installing rebuilt motors. He was often asked to work through the night changing out motors for the farmers. One particular farmer came in the following day complaining that the truck had not moved and he had been promised the work for that day. He took his keys back and was going home, but changed his attitude when he started up the smoothly running engine. Dad later started his own garage business and ran it successfully for a few years until the building burned to the ground.

The family moved to Powerview, MB where Dad found employment as a heavy duty mechanic. He worked on the construction of the Powerview dam, and later found permanent employment with Abitibi Paper in Pine Falls (circa 1953). Later, he built a house on acreage near St. Georges, MB.

When Berthe passed, Ludger moved to Ste. Anne, MB. This was coming full circle as Berthe grew up there. She still had a surviving brother on the farm.

Dad enjoyed music and was for many years a member of the choir in St. Georges. He was a member of ’Les intrépides’. He loved music but this is not a gift that was passed on to his children. We’re all musically challenged, unfortunately.

Grateful thanks to Villa Youville and its staff for the excellent care. Ludger had a great sense of humour and loved to joke and interact with staff who took the time to tease him.

Cremation has taken place and no formal service will be held except for a mass at the church in the parish of Ste. Anne. There will be a celebration of life event to be announced at a later date. Family will bury his ashes next to Berthe’s remains in St. Georges cemetery.

Offer Condolence for the family of Ludger Jubinville