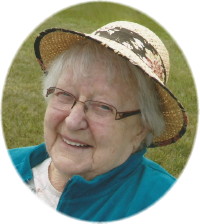 It is with broken hearts we share with you the peaceful passing of Marg MacLean.  She left gently surrounded by her family in the early morning of June 28, 2014.

Marg was predeceased by her parents William and Ellen Rigate, step-mother Gladys Rigate, brother Jack, sisters Doris, Joyce and Stella, stepbrother Roger and stepsister Dorothy.  She is survived by her beloved husband of 59 years, Ron, daughters Laurie and Valerie, sisters in-law Gladys, Dorothy and Shirley, and numerous nieces and nephews.  She was Guggy to Linda, a “Mum” away from mum to Margaret and Evelyn and special auntie to Rob and Harley.

Marg was born June 3, 1920 in Netherhill, Saskatchewan, spending her youth in Bienfait and Shell Lake.  She was employed by Canada Car, working on Hawker Hurricanes in Fort William, Ontario during the war before joining the Air Force in the Womens’ Air Corps.  Upon her discharge, she worked for Imperial Oil in Toronto before transferring to Winnipeg.  A lucky move as this is where she met Ron while on a skiing trip.  They married April 29, 1955, settling in Winnipeg and starting their family.

In 1963, they moved to Pinawa, joining the original “Pioneers” of the town.  Marg instantly fell in love with Pinawa and threw herself into community life.  She taught 4-H and piano.  As her girls became involved in activities, so did she.  She became Brown Owl for the Brownies and worked her way up to District Commissioner.  When the Pinawa Figure Skating Club needed an executive, she stepped up by serving as President and then as Past President.  Always involved with the church, Marg was organist for many years before becoming choir director for several more.  All this while being the best wife and mother ever.  A beautiful knitter and a wonderful cook, her roast beef dinners were without equal-as was her homemade bread.

With her family grown, she took time for herself by joining the golf club where she made many lifelong friends.  The cherry on top was her treasured bridge group.  Marg never had more fun than when the girls got together.  It broke her heart when she was no longer able to participate due to declining health.

The family would like to express their sincere gratitude for the support of all Marg’s friends.  Special thanks to the best neighbours in the world-Daisy, George and Helene.  You’ve made a difficult time a little less painful and we will never forget.  To everyone who visited Marg in hospital-thank you.  To the doctors and nurses of the Pinawa Hospital, thank you for your compassionate care of Marg and her family.  Thank you Reverend Rob Murray and her church friends.  We are forever grateful.

Flowers gratefully declined.  Should friends so desire, a donation to a charity of one’s choice in Marg’s memory would be appreciated.  A Memorial Service will be held in Pinawa, July 5, 2014 at 1:00 p.m. at the Pinawa Lutheran Church.

Thank you, Marg, for dedicating your life to your family.

We will love and miss you forever.

Offer Condolence for the family of Margaret Gladys MacLean