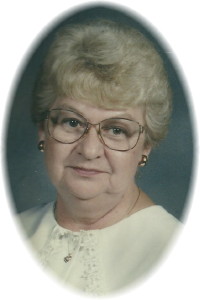 It is with deep sadness and sorrow we announce the passing of our beloved mother, grandmother and great grandmother, Marian (nee Fuerst) Uhl on Monday, February 17, 2014 at the Beausejour Hospital with her family by her side.  Marian was born on June 10, 1938 in Winnipeg, MB.

Marian spent the first few years of her life in Winnipeg and then moved to Beausejour with her parents.  Marian was young at heart and grew up with her friends finding humour in most everything they did.  However, even at a young age, Marian had a motherly nature which she demonstrated in her love and protection for her sisters.  Marian met her best friend and the love of her life, John, who became her husband on September 29, 1956.  Together they raised their two daughters in a home filled with love.  Even when our family experienced tough times, Marian was the rock that protected and nourished everyone.  Marian was a natural homemaker; her home was always spotless, she crocheted, she cross-stitched, she loved reading and the house always smelled of fresh baked bread.  When the grandchildren came, her heart had more than enough room to love each of them as she did her own children and they loved her back immensely.

Marian held several different job and always managed to have fun at each and every one.  She was most proud of obtaining secondary education to become the bookkeeper at the Beaver Lumber in Beausejour.  When Beaver Lumber closed, she and John ran a paint store in Beausejour where her goal was to keep all customers satisfied.

The family would like to say a special thank you to Dr. Askarifar and all the staff at the Beausejour Hospital for all their care and compassion.

Marian missed John in the last 10 years as she yearned to share and dissect each day’s events with him and now, together again, they will be in God’s love.

As per Marian’s request, cremation has taken place and a Celebration of Life will take place on Monday, March 3 at 1:00 p.m. at Sobering Funeral Chapel, 1035 Park Avenue E., Beausejour.  Interment will follow at Zion Lutheran Church Cemetery.

Offer Condolence for the family of Marian Uhl (nee Fuerst)