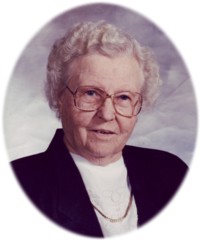 Marie Krieger passed away peacefully at the age of 95 years, on Monday, December 19, 2011 at East Gate Lodge Personal Care Home, Beausejour, MB with her daughter by her side.

Marie was predeceased by her husband William, on October 9, 1990, her parents Adolph Fiebelkorn December 20, 1972, and Emilie Fiebelkorn January 19, 1956; her brothers Henry and Fred, her sister Emma Nielson, her sisters-in-law Martha Fiebelkorn, Mary Fiebelkorn and Elsie Fiebelkorn.  She will be lovingly remembered by her daughter Lorine (Allan) Freund and son Herb Krieger, her grandchildren Brad West, Allan (Diana) West, Debbie (Rob) Ravestein, Dave (Deeanna) Krieger and Don Krieger, her great-grandchildren, Justin and Austin West, Ashley Ravestein, Brendan and Darren Krieger.  She is also survived by her brothers Louis Fiebelkorn, Albert (Georgina) Fiebelkorn, Edward Fiebelkorn and William (Marge) Fiebelkorn and her sister Lenore Dreffs, and her brother-in-law John Nielson as well as many nieces, nephews and cousins, and special friends Gord and Bev Muth.

Marie was born in Friedensfeld on September 2, 1916, where she was raised, baptized, confirmed and received her education.  On October 15, 1938 she married William Krieger at the Holy Cross Lutheran Church in Golden Bay.  They lived in Golden Bay until 1940, when they moved to Glenmoor, MB and farmed.  In 1947, they moved to Allegra, MB; resided and farmed there until their retirement to Beausejour in 1977.  While residing in Allegra, Marie was involved in a lot of activities other than farming.  She was a faithful member of the St. Paul’s Lutheran Church in Brokenhead and later of Zion Lutheran Church in Beausejour, teaching Sunday School and Confirmation classes.  She was also actively involved with the ELW, and sang in the choir.  Once retired, working at Togs N Treasures kept her busy and out of mischief.  She was an avid gardener and seamstress and always had a ball of yarn handy for her knitting and crocheting projects.  Marie enjoyed quilting blankets and feather ticks for her children & grandchildren, as well as quilting for third world countries through Zion.

Funeral service was held on Thursday, December 22, 2011 at 2 pm at Zion Lutheran Church, 403 First Street, N. Beausejour, MB with Pastor Bart Coleman presiding.  There was viewing one hour prior to the service.  Interment followed at Zion Lutheran Cemetery.

A very special thank you to all the staff on the Shamrock Unit at East Gate Lodge for their unending love and care for their “Sweet Marie”.