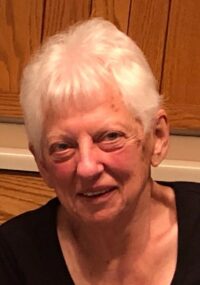 It is with heavy hearts that we announce the passing of our Mother and Grandma on October 14th, 2022, at the age of 86 at Stoney Plains Terrace in Beausejour. Mom will be forever missed by her two children daughter Janice (Mervin) Stobert, and son Terry (Lee) Loeb, along with her two Granddaughters Mackenzie and Alexis Loeb.

Mom was born March 19, 1936, to William and Mary Yestrau in Rosewood, Manitoba. She was one of four children, her two sisters Edith and Dorothy and brother Frank all predeceased her. Mom attended Rosewood School for eight years, Lorette Collegiate for high school, and Normal School where she obtained her Teaching Degree. She taught two years in Moniminto and six years in Lydiatt where she met the love of her life Billy Loeb. They were married on September 9, 1961, and enjoyed 52 years together, dancing, fishing, and playing cards where Mom would usually out fish and out play Dad!

She may have only taught for eight years but her influence as a teacher lasted with her students their lifetime. She was an amazing homemaker and Dad’s favourite camp cook at Barrier Bay. Mom was an exceptional seamstress, she worked at The House of Fabrics and Helga’s Fabrics. Also, for many years she served as the Secretary of the Beausejour AG Society, and later managed the Brokenhead River Community Hall until her retirement.

Mom loved cooking, baking, and hosting family dinners and could she cook and bake! She was an avid bird watcher and loved saying hello every year to her Purple Martins, she could grow all types of flowers, her orchids were beautiful and the garden on the farm was bountiful. She enjoyed visits with close friends, playing card games and always played to win! Mom enjoyed passing the time doing puzzles whether it was crosswords or 1000 piece picture puzzles.

We admired Mom for her courageous decision to have open heart surgery at the age of forty-seven, at the time we were terrified, and Dad was out of his mind with worry. The Doctor’s said with the surgery a life expectancy of five more years…39 years later she proved them wrong!

As per Mom’s wishes, a cremation has taken place. A funeral service will be held at St. John’s Lutheran Church in Lydiatt, Manitoba on Thursday, October 20th, 2022, at 1:00 p.m. In lieu of flowers donations can be made to Heart and Stroke Foundation.

Offer Condolence for the family of Mary Ann Loeb