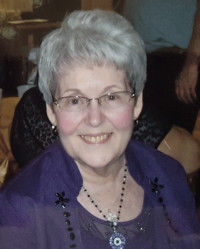 It is with great sadness that we announce the passing of our beloved Wife, Mother, and Nanny, Mary Lou (Georgette) Szajewski.  On Friday, October 20, 2017 she passed away peacefully at East-Gate Lodge PCH in Beausejour, with her adoring family by her side.

She is survived by her loving husband Casmir, children Tim (Kelly) and Michelle (Anita); grandchildren Jenna and Brady; sister Yvonne, brother Leonard, and many family and friends. She was reunited in Heaven with her parents, Albert and Rachel, brother Lawrence, and infant twin brother George.

Mary Lou was born on May 29, 1942 in Winnipeg, MB.  She began school at St. Ignatius School before moving to St. Mary’s Academy to complete her education.  After graduation she moved to Montreal and began her career as a secretary at CAE.  Her career brought her back to Winnipeg where she met Casmir and settled in Beausejour to begin her marriage of 47 years and start a family.  She followed her children to school when she restarted her career and worked 18 years as the secretary at the Beausejour Elementary School.  Her summers were filled with family vacations and her winters were spent in arenas as a devoted follower of Tim and Michelle’s hockey and ringette.  She loved to dress in costume to surprise and bring laughter to her friends.  In retirement she doted on her grandchildren and became an avid square dancer until giving it up due to illness.  She spent her twilight years in Dad’s attentive care at home until eventually moving to East-Gate where she was cared for by Dad and the East-Gate staff together.

The family would like to thank the staff in the Rose Unit for the exceptional care provided in her time at East-Gate.

Prayers will be said Wednesday, October 25 at 7:00 p.m. at St. Mary Roman Catholic Church, Beausejour. Funeral Liturgy will be celebrated on Thursday, October 26 at 10:00 a.m. also at the church.

In lieu of flowers, donations may be made to East-Gate Lodge Personal Care Home Recreational Fund.