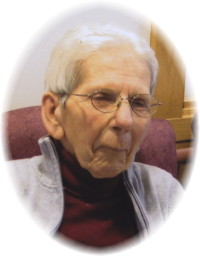 Mary Lentowicz (aka Minnie) passed away on January 24, 2013 with family by her side at Kin Place in Oakbank, MB.  She was born on September 22, 1917 at Sapton, MB.  Mary was the youngest of five siblings born to Andrew and Eva Saramaga.  She was raised on the family farm and educated at Sapton School.

Mary married Paul Lentowicz in 1938 at Cooks Creek, MB, at which time they commenced farming in the Hazelridge district.  She moved to Dugald in 1999 and spent the last two years with final care at Kin Place in Oakbank, MB.

Mary is survived by son Carl (Jan) and daughters Susan, Beatrice and Jen (Glyn) along with several grandchildren and great grandchildren.  Mary was predeceased by her husband Paul in 1980 and son Edward in January, 2013.

Special thanks to staff at Kin Place for their compassionate care.

A Memorial Service was held at 1:00 p.m. on Saturday, May 25 at Sobering Funeral Chapel, 1035 Park Avenue E., Beausejour with Fr. Owen Steeves officiating.

In lieu of flowers, donations may be made to Kin Place in Oakbank, MB.

Offer Condolence for the family of Mary (Minnie) Lentowicz