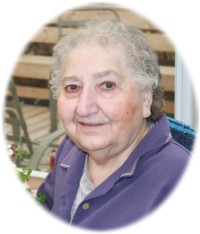 Mary was born January 1, 1925 at Thalberg, Manitoba.  She met Jim and married in 1944.  They lived and worked in Winnipeg until 1980 when they retired to Gull Lake, Manitoba.  Mary spent the past few years close to her daughter Marge in Nipawin, SK.

A light luncheon was served at Thalberg Hall following the service.

“Gone but not forgotten”

Offer Condolence for the family of Mary Olinyk