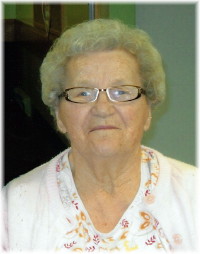 Mary was predeceased by her husband Nicholas in 1984, her daughter Pauline Krentz and her grandson Steven Krentz, both in 2005, her parents, Peter and Pearl Kies, as well as three sisters, three brothers, and her son-in-law Wayne Krentz.

Mary was born in Sarto on April 15, 1923 and lived most of her life in Stead.  She was a hard-working woman who had amazing strength and determination.  She loved to square dance and play Bingo, and she enjoyed a shot of whiskey.  She was very active with the Stead Seniors.  She was a wonderful mother and Baba, who always put her children first.

Many thanks to the staff at East Gate Lodge and Dr. Nick Van Rensburg for their care and compassion.

In lieu of flowers, donations may be made to the East Gate Lodge Recreation Department.

Offer Condolence for the family of Mary Stilkowski