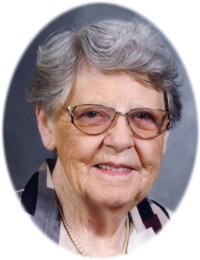 It is with great sadness we announce the passing of Norma Charles on Wednesday, January 25, 2012 at the Lac du Bonnet Personal Care Home.

Norma was born on the family farm near Cartwright, Manitoba on July 25, 1923. As a young woman she moved to Winnipeg and worked at Eaton’s during the War years. In 1947 she met Sid Charles and a year later they were married.  After spending the first years of their marriage in western Manitoba, they moved to Lac du Bonnet and made it their hometown.

Norma was predeceased by her husband Sid, her parents John and Maggie Wall, and her sisters Annie and Hazel. She is survived by her sister Alyce Yule, sons Lee and Tom, daughter-in-law Denise, grandchildren Michael (Amy) Charles and Angela (Debrana) Das, and great-grandson Emery Owen Das.

In lieu of flowers donations may be made to the Lac du Bonnet Personal Care Home.

Offer Condolence for the family of Norma Charles