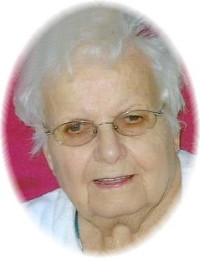 Peacefully on the afternoon of December 23, 2014 at her home in East Gate Lodge, Olga Chura passed away with her family by her side.  It was one week before her 89th birthday.

Olga was the much beloved wife of Stanley, and the mother to Barbara Sobetski (John), Norman Chura (Connie) and Judy Chura Habing (Les); Grandmother to John and Brett (Rayeann) Sobetski, Jill Chura, and step Grandmother to Tracey Gill (Dave) and Reid (Tasha) Habing; and Great Grandmother to Kyra and Dayne Gill, and Austin, Keiran and Jenna Habing.

Olga was the daughter of Nikita and Mary Malegus.  She was born on December 29, 1925 and was one of 8 children who were all raised in Melrose.  She was predeceased by her siblings John (Lena), Josie (Bill) Stanko, Peter, Nick (Sophie), Mike (Eleanore), Sam and brother in-law John Brunet.   She was also predeceased by all of Stanley’s brothers and sisters.  She is survived by her sister Kay Brunet of Alberta and sisters in-law Louise and Moira Malegus.

Olga quit school at an early age/grade 8 to care for her sick mother.  She also looked after her little sister Kathleen and attended to household and farm chores.  She learned to sew at a young age, a skill born of necessity which became her first occupation.  At 18 years old she went to work in Winnipeg at a sewing factory and while living in Winnipeg with her dear, lifelong friend Jean Kuzina, she met the love of her life Stan.  They married in 1947 and embarked on a lifelong adventure.  Together they worked hard on their farm in the Eastdale area; Olga working side by side with Stan-she could be found on a tractor, tiller or combine; tending to the farm animals or gardening.  If not outside, she was busying cooking, canning or baking.  They raised 3 children and made a warm and loving home where friends and family were always welcome, often came to visit and enjoyed Stan and Olga’s hospitality.  She was one in the first group of women bus drivers employed by the Transcona-Springfield School Division and proudly retired from bus driving after 17 years of service.  Together Olga and Stan travelled across North America in their RV, from east coast to west, north to south.  They visited their family in Alberta many times; sister, brother, nieces and nephews.  Other favourite jaunts were to the casinos of Vegas, and closer to home the casinos of Winnipeg, Mahnomen and South Beach.

Olga loved attending church, her father one of the many volunteers who built the Ukrainian Catholic Church in Cooks Creek.  She faithfully attended mass every Sunday until recent years when her health no longer permitted her to, but still continued to belong to the Catholic Women’s League and attended services at East Gate every week.  She loved to sing in the choir and her love of music was most beautifully expressed through her love to sing and dance.

She had prize winning gardens and each year thoroughly enjoyed sharing her bountiful produce with her children, grandchildren, and many friends.

Olga was an awesome cook, and could quickly whip up a delicious meal for many with the simplest of ingredients.  Baba always had favourite treats and meals ready, and entertaining anyone who came in the door was a Chura tradition.  Her home was always open to all.

But what we will remember most was her generous and unconditional love for her family.

Indeed there are angels that walk among us.  The family extends our deepest gratitude to the staff of East Gate Lodge, in particular those on the Shamrock Unit and Recreation.  She found comfort in the care and support that were available to her, and someone to share stories with.

Offer Condolence for the family of Olga Chura