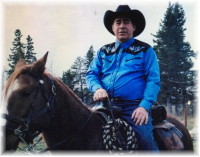 Orile was predeceased by his son, Gerald Vincent, who was born on January 26, 1967 and passed away on December 15, 1988.  He was also predeceased by his parents, Rémi and Thérèse Vincent; his brother Florent and his sisters, Diana, Rita and Adeline.

Left to mourn his passing is his only son Donald (Katharine); his grandchildren, Daniel and Riley; his great-grandchildren, Alexis and Keeanna; his brother Hubert; his sisters, Lea, Rolande, Frida, Claire and Lucie; as well as his special niece and nephew, Allan and Rita Vincent.

In lieu of flowers, a donation may be made to a charity of one’s choice.

Offer Condolence for the family of Orile W. Vincent