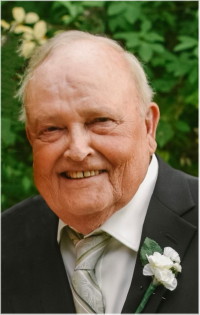 It is with heavy hearts we announce the passing of Peter Hermann Weidmann on December 20, 2020, at home with family by his side.

Peter is lovingly remembered by his wife Carole of 56 years, their son Peter Jr. (Shelley), their daughter Michelle and their grandchildren whom he was so proud of, Stephanie (Steve), Will, Matthew (Malerie) and Chris. He will also be deeply missed by his four-legged granddogs, Daisy and Grizzly. He is also survived by many nieces and nephews in Canada and Germany.

Peter was predeceased by his parents Paul and Elizabeth, his siblings Helga, Robert, Margaret and Marlies, as well as his beloved granddog Puck.

Peter was born on April 25, 1945 in Paderborn, Germany and immigrated to Canada in 1957 with his mother and brother.

Peter’s passion was repairing and painting cars. He first worked at Kruse Auto Body, then for Erin Auto Body and in 1975 he started his own business.

Peter loved the outdoors and spent many hours fishing and hunting with family and friends and later Peter and Carole retired in a home they built in Lac du Bonnet.

With the help of 2 amazing doctors, Dr. P Czaykowski and Dr. M Bruneau as well as a special thank you to Denise, he was able to fight cancer for 17 years. The family would like to thank CancerCare Manitoba, CancerCare at Pinawa Hospital, Interlake-Eastern Palliative Care Team and a special thank-you to Greg at Sobering Funeral Chapel.

Cremation has taken place and a celebration of life will be held when restrictions are lifted.

In lieu of flowers, donations can be made to CancerCare Manitoba and Pinawa Hospital.

Offer Condolence for the family of PETER HERMANN WEIDMANN