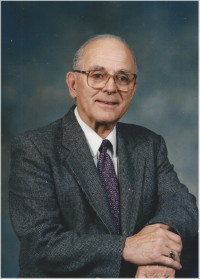 Peter Harry Kozyra passed away on February 24, 2018 at the age of 89 years, following a steady decline due to Parkinson’s Disease.  Peter was born in Brokenhead, MB on April 22, 1928.  He attended school at White Poplar and Brokenhead High.  Following graduation, he taught school at Walkleyburg and at Clover Leaf Schools.

He studied music and art and art lettering and worked at various jobs before settling in a career he enjoyed as an agent for Great West Life for 31 years.  On weekends he played violin and accordion in dance bands at socials, weddings and barn dances for many years.

He also built up a small sign business in which he skillfully created hundreds of hand lettered commercial signs.  Besides music and art, he had a passion for history and an unwavering desire to preserve local heritage.  Peter became a founding member of Broken-Beau Historical Society and served tirelessly on the committee from the time of a “vision” in 1967 until retirement in 2010.  He served in the capacity of President for many years and guided a dedicated volunteer group in its mission to preserve local history through the collection and restoration of buildings, machinery and artifacts housed in the Pioneer Village Museum.

His grandchildren will remember a kind and caring Grandpa who “could fix anything”, who supported them in their activities and built them a playhouse lettered with their names.  They enjoyed watching him paint signs in his garage/workshop.  He took them for rides in the VW Beetle, stopping for pizza and ice cream, Bergies for treats, trips to Mel’s for movies and always trips to the museum, where he would explain the various artifacts and tell them stories about the “good old days”.

Peter was predeceased by his oldest daughter Michele Day in 2014 and by his son in-law Dr. Bob Day in 1997.  He leaves to cherish his memory his wife Edna, with whom he shared 65 years of marriage, his brother Bill (Barbara), his children, daughter Maureen (Dan), and son David (Connie), his grandchildren Darren, Heather (Mike), Mathiew (Brittany), Colleen (Dylan), Benjamin (Colleen), Maggie (Jacob), and Patrick (Denyse), great grandchildren Ayden, Claire, Celeste, Lilia, and Morrison, sister in-law Evelyn, brother in-law Paul (Connie) and many nieces and nephews. He was also predeceased by his sister in-law Beverly and brothers in-law Douglas and John.

Thanks to staff at Rose Unit of EGL for the care and comfort provided to Peter in his final years.

A Memorial Service will be held on Friday, May 18 at 1:30 p.m. at Brokenhead River Community Hall.

Memorial donations may be made to Brokenhead River Community Foundation, Box 2225, Beausejour, MB R0E 0C0 or to a charity of choice.

Offer Condolence for the family of Peter Kozyra