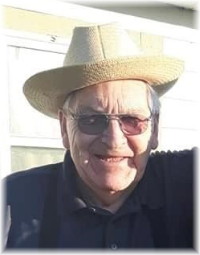 Rey was born on February 5, 1934 in R.M. of Louise, Manitoba then growing up in nearby Carmen. Rey made his way to Hollow Water almost 45 years later; meeting the love of his life and settling into his forever home with her and their family. Rey was affectionally known as Beckett to his brothers-in-law and Uncle Rey to all of his extended family, and lovingly Papa Rey to Jean and her family.

Rey began his career working for CP Rail as telegrapher linemen, then going into drilling, from there he moved to Winnipeg and worked with Co-op farm equipment; then his northern life began first working for Frontier School Division in the area of maintenance, from there he moved into Natural Resource as a district fire ranger from which he retired.   Rey was our jack of all trades; fisherman, district fire ranger, handymen, taxi driver, and puzzler.  He was always working on something for his home and for his family, if there was a will Rey discovered the way usually his own way and on his own path.

Though we are grieving and missing you so, in our hearts we know, the Creator and Isabel have met you on the other side to ensure your journey is complete. For your love for Isabel was beyond your human heart, your love was so deep and so true that the bond that is everlasting. Rey lost his ability to hear, but in that he never lost his ability to listen; he listened with his heart after all, when Rey hugged you, you knew you were loved! Beckett, Uncle Rey you are loved, and will be forever missed.  May Creator guide your path and your journey, rest in peace.

A special thank you to Jean, Eunice and John for their dedication to his care and well being. Thank you to the staff at the Pine Falls Hospital and Giigewigamig Traditional Healing Centre staff for their kindness and care given to Rey during his time there.

Offer Condolence for the family of Reymond Peter Beckett