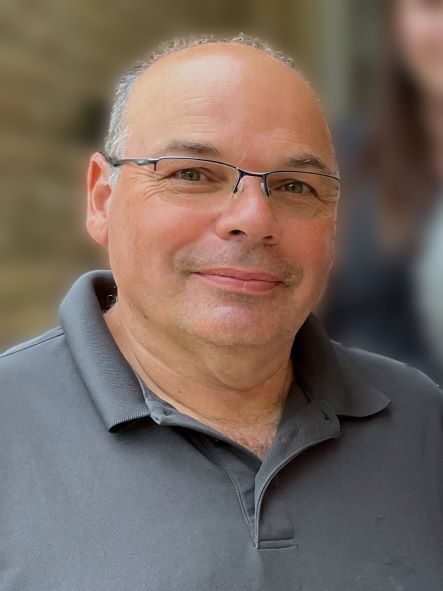 It is said that in the end we are all just stories.  In the early afternoon on the 12th of July, 2022, Rene Alfred Chevrefils finished writing his wonderful story, peacefully at the age of 54.  He began his tale during a beautiful autumn evening on the 24thof September, 1967.   He wasn’t alone in writing his story.  He met a girl, fell in love and made Lynn (nee Lazaruk) his wife.  She was by his side as he wrote his final chapter.  Their life together brought them many joys and wonders, not the least of which was their lovely daughter Alissa (Kody), and their venturesome son Jacob.

Rene grew up in a house filled with love and adventure.  Whether he was spending time learning about growing plants in the greenhouse with his parents Sylvio and Jeannette, or by exploring the fields and forests of Broadlands with his brothers Paul (Andrea) Tourond and Marcel (Heather), or by spending time with his sisters Lise and Sylvie (Stephan) Cooper, he approached all he did with his unique brand of mischievousness and sense of fun.

As he grew into a man and started a new chapter with his bride, their individual stories became one.   This introduced a host of new characters such as Lynn’s parents Gene and Susan Lazaruk, and sister Joanne (Sheldon) Gesell, who enriched the storyline.  As time went on and more chapters were written other characters were introduced to Rene’s story including nephews Tyler Krenz and Davis Gesell, nieces Celine Tourond, Gillian Gesell, and Gabrielle Cooper.

At the age of 17, like many others in Pine Falls, he began his career in the paper mill where he would learn the trade that would lead him on to many other adventures.   After the mill closed, with a pipefitter’s ticket in his pocket, he took his skills on the road to places like Canadian Nuclear Laboratories and later Tanco Mines, a place he loved to work and where he became part of a work family that treated him with nothing but care and respect through the last pages of his story.

The hero of this tale enjoyed being surrounded by friends and family and loved small town living.  Small town living is what got him involved with things like the local baseball team called “The Brew Crew” which is where his and Lynn’s love story began.   They wrote their story together for 28 years, almost 26 of which were married.  Their best stories are on the waters of the Winnipeg and Bear Rivers.   They were only a glance away from the beauty and tranquility of a sunrise over the water, where Rene would sit and relax and enjoy all that nature had to offer to him.  Sunset often found him on his boat with Lynn and their dog Lily by his side as they enjoyed quiet summer evenings.

Rene had many passions, not the least of which were his vegetable garden and yard – the skills he learned as a young boy served him well in later chapters.   He treasured moments like those with his daughter Alissa on boat rides, and fishing with his son Jake.   Rene cherished the time spent with his children.  They made his story so bright and alive.   He also enjoyed traveling, whether to Europe to visit his brother, or to Las Vegas with his wife.  The trips that he loved the most, though, were those with Lynn, Alissa, and Jake when they visited Disney in Florida.  Being with his family and surrounded by their love was the most important thing to him.

The villain of this story appeared in December of 2021 when Rene was diagnosed with esophageal cancer.  Our hero and this villain battled hard for nearly eight months.  This leads us to the 12th of July where Rene found himself in the compassionate care of Dr. Prematilake, Dr. Dawe, the nurses and staff at Selkirk Cancer Care and Selkirk General Hospital.   It is here where Rene finished writing his story. We will remember and we will tell his story as long as we can, which has been the point all along.  In the end, we are all just stories.

We will write the epilogue to his story with a Celebration of Life on Saturday, September 10, 2022 at 2:30pm at Sobering Funeral Chapel and Crematorium, 1035 Park Avenue East, Beausejour, Manitoba.

Rene would like to get the last laugh on Cancer, and you can help him by donating to Cancer Care Manitoba in his memory.

Offer Condolence for the family of Rene Chevrefils