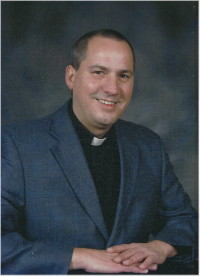 He was predeceased by his parents, Norman and Clara (Nee Cure), his brothers Jack and Bill, his sister Marilyn, and his beloved dogs, Franklin, Clara and Colin.

Owen was born on August 13, 1962 in Selkirk, Manitoba and was raised in Lac du Bonnet and Winnipeg.

Owen entered the workforce at the age of 12 and after school, worked at KFC and Shell.  In his graduating year of high school, he received an award for the highest marks in Mathematics. Earlier in his life, Owen studied and graduated a course in massage therapy. He also worked as a funeral director at Green Acres in Winnipeg and Connelly-McKinley in Edmonton. Owen graduated with a Bachelor’s Degree in Arts (with a major in Catholic Studies) from the University of Manitoba and then on to a diploma in Specialized Pastoral Education, and a Masters of Divinity Degree in Edmonton, Alberta.

Owen, being deeply spiritual and a realist, was attentive to the promptings of the Holy Spirit and responded to a call to study and to become an ordained priest. He attended seminary through the Archdiocese of St. Boniface, completed his internship and was ordained on December 12, 1996 at Christ the King Parish in St. Vital.

Father Owen ministered for a year as Chaplain at the Prince Albert Penitentiary. Upon his return to Manitoba, he was appointed assistant pastor at Christ the King Parish and   Catholic School, ministering to the families and community. Being very creative and effective, and sharing his gifts for the good of others, he participated in the renovations of the church and was available to serve the needs of all who came to him.

Father Owen had a special gift for bringing his parishioners together under common causes. He also had an undeniable talent for capturing the essence of a person during his funeral homilies.  At regular Sunday services, his parishioners would leave being fed from the word of God and inspired to welcome the Lord into their hearts and to be better people.

Father Owen was a beloved priest and cared deeply for the communities which he served. He had a remarkable presence with people, down to earth nature, and a mischievous grin. His deep faith touched the lives of all who knew him. He connected easily with all people and his preaching brought the Gospel into his parishioners’ lives in meaningful and relevant ways. He invigorated and revitalized the parishes which he had stewardship over.  While at St. Mary’s Parish in Beausejour and Our Lady of Hope in Anola, he restored priceless Leo Mol murals and renovated the interiors of both parishes. He loved to decorate the churches for all liturgical seasons with Sheri and Tim.

Father Owen organized numerous events such as the yearly pilgrimage for Our Lady of La Salette, garage sales, Chase the Ace, and other fund-raising events.

He could always be found in the church with his beloved dogs at his side; he would greet you with a laugh and a hug.

While at the parishes, he undertook and completed major upgrades.  He revitalized the church basement, giving much needed space to the CWL and the Knights of Columbus.  This also provided an overflow for wedding and funeral attendees and gave parishioners a place to enjoy pancake breakfasts and other church events.  Other improvements included the installation of furnaces, air conditioners, a new roof, new windows, new carpets, new front doors and the list goes on.

Following this appointment, he became pastor at Blessed Sacrament parish in Transcona where he served the community for several years from August 2005 until 2009.

While ministering there, he along with his good friend Deacon Jim Frater had a new roof installed, new carpets throughout the church, a decorative iron railing with two gates put in for the baptismal font, a niche built in honour of Mary, mother of Jesus with votive candles, the entrance doors replaced, new washrooms built, the interior of the church repainted, and the parking lot repaved.

Fr. Owen enjoyed and was a great supporter of the Blessed Sacrament Players dinner theatre fund raising group as participator and active member.

In August 2009 – 2018, Fr. Owen returned as pastor to St. Mary in Beausejour and Our Lady of Hope in Anola. He continued in building the community and parishes, including upgrades to the St. Mary Cemetery. Under his care, both parishes were left financially secure. Perhaps his greatest gift, however, was his unconditional welcoming of anyone seeking acceptance and spiritual growth. In the communities he served, all were welcome and blessed by Fr. Owen’s invitation to share our faith.

Father Owen had many creative and administrative abilities and created the logo for the Gerald McDougall Memorial Foundation Inc. as member of the board. He served as Chaplain to the Third and Fourth Degree Knights of Columbus, as well as the Catholic Women’s League.

On August 1 until December 13, 2020, Fr. Owen was appointed to Holy Redeemer Parish in North Kildonan. Sadly, his time was short with the members of the parish.

There is so much more to share with you, his friends, and a Celebration of his Life will take place for you at a later date, when the pandemic ceases to ravage this world.

Due to Covid-19 restrictions, a private vigil service was held for immediate family on January 3. A funeral Eucharistic Mass of the Resurrection presided over by Albert Legatt Archbishop of St. Boniface was celebrated January 31/21.

A Graveside Service will be held at Green Acres Cemetery at Our Lady of Hope Mausoleum on Sunday, February 14 at 2:00 pm.

If you wish to attend, please abide by Covid-19 restrictions. Tune your car radio to FM 98.1 to listen to the service. Everyone is required to remain in their vehicles at all times, unless regulations are lifted. There will be an opportunity to drive by and pay respect to Father Owen’s casket before entombment.

Offer Condolence for the family of Reverend Father Owen Steeves