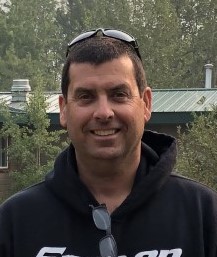 With breaking hearts and impossible sadness we announce the sudden passing of Rick Klingbell our beloved husband, father, son, brother and friend.

Rick was born in Beausejour, Manitoba, on June 8, 1968. He lived most of his childhood in the North End, attending Machray Elementary, St. John’s High School, and later went to Red River College.  He was very active in sports thanks to CPAC and played Basketball, Football. Lacrosse, and Rugby.  He was proud to go to Nationals one year to represent Manitoba in Lacrosse.   He had many fond memories of living in the North End and was a North End Boy through and through.

He worked at Reimer Express Lines for a time where he met his wife, Sharon, and later worked at Manitoba Liquor and Lotteries – Video Lotto Division until his passing.

Rick and Sharon moved to the community of Tyndall/Garson in April 1998 and married in August of that year. He was the love of Sharon’s life and best friend forever.

Rick got the surprise of his life when he found out they were having twins and was the proudest father. His daughters, Sarah and Emily were his pride and joy, and he packed a lifetime of memories in the short 18 years that he had with them.  They were the light of his life and he was the light of theirs.  He loved being an involved father. He frequently attended school trips with the girls, baked cookies for the class and drove them to early morning Cheer practices.  He started coaching recreational soccer when the girls were 6 years old and coached them until just last Spring.  He loved coaching both his girls and the kids in the communities of Tyndall, Garson, and Beausejour.   He also loved his dog, Ella. They had a special bond.

Among his other passions were camping, fishing and exploring.  His favorite spots in the world were Clear Lake, and Long Lake, Manitoba.   He also loved the mountains and came alive when he was in Kananaskis and Jasper.  The girls will forever cherish the Rockies trip they took this past summer with their Dad.

Rick was a member of the St. Jo’s Wildlife Association where he had made many friendships.  He and his family, extended family and friends went to the cabin at Long Lake where he was in his glory fishing, visiting and relaxing.

Rick also was a member of the Eagles, Tyndall Aerie.  He was proud of the community he lived in and chipped in when he could to help.

He was also a member of Haystack Productions, when he decided in 2010 that he wanted to try acting in community theatre.  There he made so many truly good friends and was in his glory.  He played numerous roles in the dinner theatres with his favorite role being Jethro in ‘The Beverly Hillbillies’.  Most recently he was elected to be President of the Haystack Board.

Rick loved people and he loved to joke around – his laugh was infectious.  He always knew someone anywhere he went and took the time to talk to everyone.  He was loud, fun, energetic and made every event joyful.  He would do anything for anyone without being asked and expected nothing in return.

Rick had a huge heart.

As per Rick’s wishes, cremation has taken place.  A Celebration of his life has been planned for Sunday November 18 at 1:00 p.m. in Beausejour at Brokenhead River Community Hall.  320 Veterans Lane (off of James Avenue).

Offer Condolence for the family of Richard Allan Klingbell