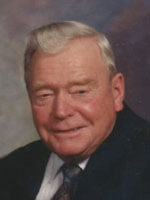 Our family announces the passing of our beloved dad, grandpa, brother and uncle, Richard (Dick) Armstrong on Wednesday, December 21, 2016 at the age of 83.

Dad was predeceased by his wife of 56 years, Laura (nee Thorarinson) in 2013.

Dick leaves to mourn his passing his children Darlene, Richard (Lynda), Neil (Shelley), and Dwayne (Cindy).  His memories will live on in his grandchildren Jack and Julia Armstrong.  Dick is also survived by his brother Bill (Corrine); along with in-laws Leonard, Mabel, Julie, Polly and many nieces and nephews.

Dad was born and educated in the Tyndall-Garson area.  On June 29, 1957 he married Laura and resided in Tyndall, MB.  Dick was an iron worker by trade and had worked all over western and northern Canada.  He worked on many bridges, mines, and dams.  Some of his greatest projects included the tallest building in Winnipeg, The Richardson Building and TD Tower to name a couple.

Our dad had a terrific sense of humor and loved to joke around.  He had a love of music, especially country, with Hank Williams Sr. being one of his favorites.  He enjoyed watching baseball and ice fishing with his boys.  “Skip-Bo” was a card game that dad played with his kids and especially his grandchildren.  There was even a trophy that was competitively played for.  He loved to pass time with his word searches and Jumble Puzzles from the paper too.

Dad had the pleasure of seeing his grandchildren at East Gate Lodge as part of their school activities, either at bingo or setting up for parties for the recreation department.  We wish to thank the staff of the Shamrock Unit for their grace and compassion shown to our dad.

Flowers are gratefully declined and donations may be made in honour of our father to the Evangelical Lutheran Church of Selkirk, Box 65, Selkirk, MB R1A 2B1 or East Gate Lodge Recreation Department, Box 1690, Beausejour, MB R0E 0C0.

Offer Condolence for the family of Richard “Popeye” Armstrong