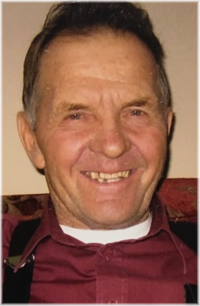 Richard passed away peacefully at East Gate Lodge on February 18, 2019, at the age of 82 with his wife Edna and son Donnie by his side.

He was predeceased by his mother Carrie and father Joseph Mroz;  his brother-in-law Ed Komadowski and sister-in-law Sandy Shumila.

He leaves to mourn his passing, his wife of 55 years, Edna, his son Donnie, his daughter Sharon (Glenn), his four grandchildren, Will, Nicole, Kyle and Amanda, his sisters Wanda and Stella (Leo) , numerous nieces and nephews and friends.

Richard spent almost his entire life on his farm in Brokenhead.  It was his one true passion.  Over the years he accumulated a large collection of vintage tractors and farm equipment.  He took great pride in keeping them all in perfect running order.  He was also an avid animal lover and could always be seen with a dog by his side.  Richard was known for his sense of humour, his infectious laugh and his kind and generous spirit.

Funeral Liturgy will be celebrated on Wednesday, February 27 at 11:00 a.m. at St. Mary Roman Catholic Church, 516 Atlantic Avenue, Beausejour with interment in the Mars Sandhill Cemetery.

Special thanks to the staff at Eastgate Lodge for their loving care and support during Richard’s final years.  They truly became family to him and for this we are so grateful.

Offer Condolence for the family of Richard Mroz