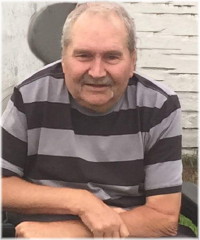 After a lengthy fight with MS, it is with heavy hearts that we announce the passing of Richard Witzke at the Beausejour Hospital on Thursday, February 18, 2016.

Richard was born on July 19, 1949 in Golden Bay, Manitoba.  Soon after, his family moved to a beautiful farm in Green Bay, “God’s Country” as Richard always said.  Here, he grew up working on the family farm.

As he got older, he also worked at Coldspring Granite and eventually moved to Winnipeg and worked for Bird Construction.

On July 19, 1969, he married his high school sweetheart Bonnie Kellett.  Richard joked that he wanted his anniversary on his birthday so he wouldn’t forget.  He still forgot.  Richard couldn’t resist the draw of the “simple life” and in May of 1971, Richard, Bonnie and their newborn daughter Kerry moved back to Beausejour.  A year later, they took over the family farm in Green Bay.  It was the perfect place to raise their own family.

The demands of running a dairy farm and attending to crops was a challenge that Richard wouldn’t have traded for anything.  Their home was the gathering place for many family events.  Football games, canoe rides, quad rides, bonfires or an action packed game of cards were highlights enjoyed by many visitors to the farm.

A very special thanks to Kenny and Terry for all their help over the years.  Thanks also to Dr. Partyka, the nursing staff of the Beausejour Hospital and the Beausejour Ambulance Service for their care and compassion.

A Memorial Service will be held on Tuesday, February 23 at 10:30 a.m. at Sobering Funeral Chapel, 1035 Park Avenue E., Beausejour.

In lieu of flowers, if so desired, donations may be made to a charity of your choice.

Offer Condolence for the family of Richard Witzke