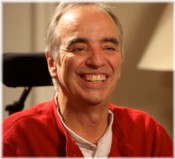 It was with sadness and joy that we announce the passing of Rick Fewster on Friday, August 13, 2010 at the age of 57 years.

Sadness, because we have lost a much loved member of our family. Joy, because Rick is no longer bound by the challenges of the ALS disease. Rick was born in Winnipeg and grew up on the family farm at Sperling and attended school at Sperling and Carman Collegiate. During his career in the flooring business he worked in Winnipeg and Ottawa, Renfrew and Mississauga in Ontario. Later he was associate pastor for the Toronto Christian Fellowship and founded his own Word Alive Christian Wholesale Book distributing business which he expanded and moved to Niverville, Manitoba. In 1996 Rick founded Canadian Cassette Services and moved to Winnipeg where he lived with his wife Joan until being diagnosed with ALS Lou Gehrig’s disease in February 2008. Following the ALS diagnosis Rick and Joan moved to Whitemouth, Manitoba. During the two and a half years before his death Rick and Joan were very active in increasing ALS awareness in the Whitemouth and surrounding communities giving presentations and sharing the progress of his disease. These included participating in ALS Walks to raise funds, making many visits to schools to increase the awareness and understanding for students as well as participating in personal videos for the awareness and education programs for the Manitoba ALS Society.

Rick will be lovingly remembered by his wife Joan; his children in order of age Jake (Val), Jennifer (Cliff), Colleen (Grant), Ella (Roger) and Daniel (Nigel); his parents Wendal and Doreen, his sister Shirley (Bill), his brother Garth (Dianne) and his sister Marsha (Clinton) as well as ten grandchildren and many other members of Rick’s and Joan’s families.

A Memorial Service will be held at the Whitemouth Community Centre on First Street in Whitemouth on Friday, August 20 at 2:00 p.m. Cremation will be followed by a private interment at a later date. If friends so desire, memorial donations may be made in Rick’s honour directly to the A.L.S. Society of Manitoba, 493 Madison Street Winnipeg, MB. R3J 1J2.

Rick’s family would like to express their deep gratitude to the Manitoba A.L.S. Society ; the NEHA Home Care and Palliative Care Teams; the HSC Engineering and Respiratory teams (Dr. Janice Richman-Eisenstat); Dr. Ed Spence; the Deer Lodge ALS Team; son Jake and Val Kasowan and daughters Tia and Katie who shared their home with Rick and Joan during Rick’s illness and who, along with Rick’s parents Wendal and Doreen Fewster, provided ongoing dedicated care.

Offer Condolence for the family of Ricki Gale Fewster