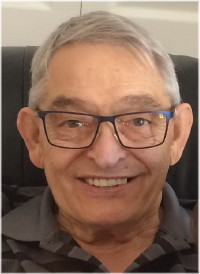 Peacefully in his sleep, Robert passed away after a 2 year hard fought battle with esophageal cancer.

Dad was born on April 10, 1942 and lived in Lac du Bonnet his whole life.  He worked for Atomic Energy for over 25 years. After retirement, he was elected to the R.M council for 16 years; some of that as Deputy Reeve. He also belonged to the Lions Club, the Legion and the Knights of Columbus where he was Grand Knight for a time.

Dad was the most amazing person, making friends everywhere he went. He had a way about him that endeared him to people. He had such a colourful personality you couldn’t help but smile after spending time with him.  Dad will be remembered best for his comedic personality. He loved to crack jokes, adding his own personal touches to it, stretching the joke out until we all lost interest – We’d often get a “sluchaj”, I’m telling a story here!” to draw us back in. He made up his own words and sayings. We’d often get a “goja” or “cicho”, probably some variation of a Polish word, but we always knew what he was saying.

Dad would do anything for anybody. He was the guy that did all the tough jobs. You could always count on Bob.

Big Bob was an incredible fastball pitcher, playing for the Lac du Bonnet Huskies for over 25 years. He was much feared in the fastball league as well as the Pinawa Plant league. He would quite often be picked up by other teams to pitch for Provincials.

Dad and mom began dating in Feb. 1964, married on October 21, 1967 and they were inseparable for 55 years. They enjoyed going to Celebrations, Club Regent shows and many concerts. It seemed they were always on the go. They went on many trips together including the most recent to Jamaica to see their daughter Bobbie get married, where he discovered the “naked banana” cocktail – extra naked!

Mom and dad, well dad mostly, really enjoyed going to the music jams in town. He would play guitar and sometimes sing, he really loved his country music.

Dad’s absolute pride and joy were his grandchildren. He and mom spent many, many hours babysitting, watching the kids play sports, and just being a second set of parents to all. Dad taught the kids various useful skills and some not so useful but whatever it was, the kids loved every minute of it.

A heartfelt thanks to Dr. Biniam Kidane for his care and compassion. He truly made us feel like dad was his #1 priority.

A big thank you to Lisa Kroeker and Dr. Frederick Zeiler for their amazing care and attentiveness.

In lieu of flowers donations can be made to Lac du Bonnet & District Charitable Foundation, PO Box 744, Lac du Bonnet, MB  R0E 1A0.

Offer Condolence for the family of Robert Bruneau