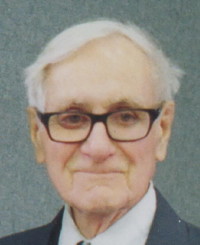 After a long and courageous battle with chronic kidney disease, Robert Greenwood Briercliffe, aged 94 years, went home to be with his Lord on Friday, March 5, 2021. He passed away at the Pinawa Hospital with his immediate family present, surrounded and sustained by their love. A private family service of remembrance is planned with Christian burial to follow at Pinawa Cemetery. Reverend Robert Murray will officiate the committal. Robert leaves to mourn his beloved wife Phyllis of 65 years, daughter Beryl (Blair) Peters; son Robert (Cheryl) Briercliffe; grandchildren Brock Peters, Winston Briercliffe, Merridy Peters, Spencer Briercliffe, Kerensa Peters, and Eagan Peters; and extended family and friends.

Robert was born in 1926 in his grandparents’ home on Greenwood Place, a street in Winnipeg named after his grandfather. His early years were spent on the family farm in Millbrook with his parents Vernon and Emma (Jackson), his brother, Bill, and numerous goats, chickens and bees. The Briercliffe Farm was well-known in the community for local barn dances, baseball games, a community skating rink, social events, and more. Robert enjoyed sharing entertaining stories of his early farm life.

Robert’s love for aviation emerged in his early years and he treasured his Jimmie Allen Trophy for flying model airplanes. Robert was a master story-teller who enjoyed telling hair-raising anecdotes of flying light aircraft and buzzing his neighbor’s fields so low, he’d “take the hats off their heads.” His love of aviation continued throughout his life. Family and friends have special memories of Robert’s 90th birthday held at the Royal Aviation Museum of Western Canada, where he regaled the audience with stories and his famous yodeling.

Following life on the farm, Robert joined the Canadian Army Cadets when he moved to Winnipeg for school, leading to a fifteen-year career with the Canadian Army Reserve where he rose to Sergeant Major. He was proud of his “Canadian Forces’ Decoration” (CD). It was during this period that he met the love of his life, Phyllis Anderson. They started off life in Charleswood and settled in Pinawa, where Robert and Phyllis have lived for 54 years. During this time, Robert’s wife, children and grandchildren were his focus and great joy. He loved nothing better than being with his six grandchildren doing puzzles, playing board games, catching snakes and frogs, carving toys, and telling jokes and stories. Nothing made him happier than attending any school, music, or sports event that his grandchildren participated in.

Robert and Phyllis were long-standing members of the Pinawa Christian Fellowship (PCF). Robert was very proud of the PCF belief in a shared ecumenical ministry and said he wished the world could model the approach of four diverse denominations living and working together. Robert’s faith strengthened and supported him throughout his entire life; he was a beloved and inspiring model of selfless Christian servant leadership.

Robert and Phyllis enjoyed travelling all over the world throughout their 65-year marriage, RV’ing from the Yukon to Mexico with friends and members of the Good Sam Club. Grandchildren have special memories of Gran and Poppa arriving to visit in their RV and picnicking with them at Otter Falls.

Music was a special joy in Robert and Phyllis’ life. Robert enjoyed a wide range of music genres from country-western to classical opera. He loved hearing his grandchildren sing and perform various music instruments. Even in the last few days of his life, Robert drew comfort from music and sang from his hospital bed, “There’s No Place Like Home.”

The family is enormously grateful to Dr. Sayfee and the staff of the Pinawa Hospital for their exceptional and outstanding care of our cherished husband, father and grandfather. Robert passed from this world to the next, confident that his Lord was waiting to receive him in ever-lasting life, reassuring his family, “I’ll always be there with you.”  We love you Robert, Dad, our forever Poppa.

Offer Condolence for the family of Robert Greenwood Briercliffe CD