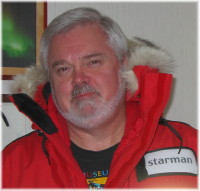 Let us tell you about our Dad; he was Starman, a self-proclaimed “simple country boy, fresh off the rutabaga conveyance.” He was a big personality, who grew the best gardens, made the best pickles, pierogies, cabbage rolls and veggie casserole, and was the best storyteller.

Dad was proud of his upbringing in Oakbank. He loved animals (even cats, despite what he might have said) and animals loved him – a trait he inherited from our Grandpa, Michael. Chickens may be the exception to the rule; when he was young, he was scared to collect their eggs from the coop and convinced his twin brother Richard to take that role while he “kept watch.” That being said, one of his favourite stories to tell was about his chicken Ralph being spared from becoming Sunday dinner (spoiler alert: Ralph was in fact dinner at some point).

Both “a trained observer” and a teacher, Dad spent time in the schools of Springfield, the Planetarium at the Manitoba Museum and in Churchill where he taught courses on Aurora and astronomy. Churchill is where he met our stepmom, Dawn. The community was further solidified as part of his identity when at two years old his granddaughter Maelle named him “Grandpa Churchill” because he talked about Churchill so frequently and fondly.

Teaching ran in the family and the field of education is where his mother (Anne), sister (Eleanor) and brother also focused much of their careers. It helped that he was an award-winning public speaker, so when he spoke people listened. Dad would employ his teaching skills with us (Shane and Jill) and his grandkids Maelle and Jack; always pushing us to do our best and then do better. Thank goodness he jumped at the chance to help homeschool the grandkids during lockdown last year because new math is a mystery wrapped in an enigma. Nothing brought him more joy than to introduce the beginnings of “the calculus” to a new generation.

One of Maelle’s favourite things about Grandpa was that he didn’t mind rough housing and often times Grandpa would start it by threatening to eat their toes. He’s always known how to crank up the energy with kids; we have vivid memories of him throwing us and all our friends in the lake in intense games of Beat the Beast when we were little. Related to cranking up the energy with kids: one of Jack’s favourite things about Grandpa was that he would feed them ice cream and tell him not to tell his parents (Jill and Mike).

Dad was involved in his community in various ways including car rallies, Kinsmen, Toastmasters and Parliamentary Procedure groups of all sorts. He treated his friends like family, and he would do anything for family; build houses and fences, cook ribs, play Santa, rebuild a motorcycle engine, organize a birthday gift hunt or hang nine odd-shaped photos at precarious heights over a stairwell.

We’d love to share with you some of the highlights of our life lessons from Dad:

There is an enormous hole in so many lives now that he’s gone; we miss him terribly. Those who knew Dad may be familiar with a little speech he would give whenever gifts were being exchanged, so we’d like to close with this message to him: On behalf of lawn bowling and other kindred sports we’d like to show our appreciation for all your endeavours to date, we anticipate your good work will continue in the future, and Dad, thanks for coming out. We love you.

Offer Condolence for the family of Roger Woloshyn