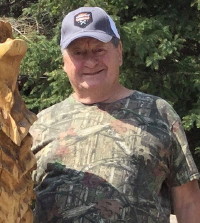 It is with much sorrow and heartbreak that we announce the passing of Ron at the age of 75.  Ron peacefully passed away with his wife Sharon, his beloved wife of 53 years, and his family by his side.

Ron was predeceased by his father, Herman and mother Lena; and niece Lisa Baker.

Ron was born in Golden Bay, Manitoba and was raised by his grandfather and grandmother, Roy and Helena Singbeil, along with his big sister Rosie on the family farm in Golden Bay.

He met the love of his life, Sharon, at the age of 21.  They married in 1966 and bought their first home in Beausejour and started their family shortly after.  Their daughter, Wendy arrived in 1967 and son Darren, arrived in 1969.

Ron went to work in Winnipeg at a construction company called Jenkins at the age of 16 but soon realized he wanted to work in the bush.  At age 17, he started to work in Pine Falls in Camp 27, and cut wood and quickly learned that this was his passion in life.  His next step in life was to stucco.  He worked with Eric’s Plastering for over 40 years and with his trade skills he had brought beauty to many homes.   In 2007, for six years, he was a maintenance worker at the Beausejour Hospital and East Gate Lodge.  He also did maintenance work for his son’s business from 2001 until his passing.  Ron took pride in his work and it showed in every job that he had.

In 1974, Ron had a dream to build his family home in Golden Bay, in which he resided in until his passing.    It was here that he taught his daughter to drive “three on the tree” in the open field and his son to hunt and trap.  He had many farm animals over the years, from chickens and cows to horses.  He had a garden that he took pride in and his yard was a picture perfect park setting.  He had many loves, that being riding around on his garden tractor, his wood stove, big tv, and in his earlier days checking his trap lines and snowmobiling.  He was most happy being home and puttering around his yard in an unbuttoned shirt, ripped jeans/shorts and high socks with shoes.  He loved his cap and hat collection.  You would always find him wearing a different one when you would stop by.  Ron was one of the handiest people you would ever meet. He always knew how to fix something, find a part or item that you needed (usually hidden on his property) or knew someone who could help you out.  Until his passing, he cut his own grass and planted many trees to keep it immaculate.

Ron always had an open door to many friends and family over the years.  Many would stop by for a visit and always had a story to share.  Ron would welcome anyone at anytime.  He was the life of a party and always a good friend.  He would offer a helping hand and be there when you needed him. He had a memorable ‘smirk’ when he was happy or cracking a joke, this made everyone smile.

During the years when his grandchildren were small, he enjoyed camping with them and teaching them the values of country living.  He created special memories with them that they will share with their grandchildren.  He always had time for each grandchild and was proud of their accomplishments until his passing.  He attended every birthday and important life event they had.  He always wanted to know what they were up to and wanted to make sure they were okay.

It is with heart filled thanks that the family wants to thank the staff at the Cardiac Center of Excellence-Asper Institute for their compassion and professionalism during this difficult time.

In lieu of flowers, donations in Ron’s name can be made to the Heart and Stroke Foundation of Manitoba.

Due to COVID-19, a small memorial family gathering will take place.

Offer Condolence for the family of Ronald Herman Singbeil