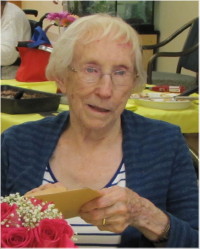 Rosina May Dunford, 96 years of age, passed away at the Whitemouth Personal Care Home on June 27th, after struggling with the horrors of dementia for several years.

May was born May 30, 1922 in Swan Lake, Manitoba, and grew up in Winnipeg during The Great Depression.  She was the second youngest child and second daughter to Margaretta and Arthur Taylor.  May married her childhood sweetheart Bill Dunford on January 1, 1940, as he was preparing to leave for training and then on to fight in Europe during World War II.

Mum came to Pinawa in 1963, a year after Dad had been working and living there, commuting to Winnipeg on weekends while Mum held down the fort with 6 kids.  They spent many years in Pinawa raising family, golfing in Pinawa and around the province, loving the life they could never imagined when they started out all those long years past.

Interment will be a private service in Pinawa.  In lieu of flowers, donations can be made to Equal Opportunities West in May’s name, or to Manitoba Heart and Stroke FoundationManitoba, 1379 Kenaston Blvd. Winnipeg, MB R3P 2T5.

Offer Condolence for the family of Rosina May Dunford