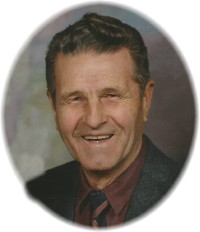 Rudy Kunkel, aged 88, of Beausejour, Manitoba passed away on August 23, 2015 at the St. Boniface Hospital surrounded by his family.

Rudy was born in Germany on March 25, 1927 to Rudolf and Martha Kunkel. They immigrated from Germany to River Hills, Manitoba. They later moved to Lydiatt where he met the love of his life, Ethel. Dad and mom were married October 21, 1950. They moved to Winnipeg in 1960 where dad got a job with Blue Ribbon Bus Lines and later for Winnipeg Transit where he worked for 19 years. They moved in 1974 with their three daughters back to Lydiatt where they had a hobby farm. Dad found he could make extra money with all the peat moss on the farm. He hauled many loads of peat moss to Winnipeg. Dad’s next venture was taking on a job as a cement truck driver. His last position was with Beausejour Redi-Mix. He worked there until he was 74 years old. You could tell how much he loved his job and the people he worked with from the stories he told. And how he loved to take his grandchildren along for a ride in the cement truck. Mom quite often accompanied dad on some of the longer drives to job sites.

One of dad’s passions was rebuilding the 1921 Model T. Mom and dad drove all over Manitoba looking for parts. Piece by piece they worked on putting the car together. They would often talk about the drives they went on picking up parts and the hours put in to it. They did everything on it right down to upholstering the leatherette top to the seats.

Daddy enjoyed puttering and he could fix anything. He enjoyed playing his guitar, hunting, ice fishing and the outdoors. His 7 grandchildren were the joy of his life. There was nothing he wouldn’t do for them. He was so proud of all of them and his face would light up as soon as he would see them and as soon as they would see him you could hear them call out “Papa!” and they would race into his open arms.

Dad went to church on a very regular basis and spent many terms on the church council in the St. John Lutheran Church in Lydiatt. He later joined the Zion Lutheran Church with mom. His Bible, which is well worn, was always open on the kitchen table along with his copy of the Daily Devotions.

Dad will be greatly missed by many. We take comfort in knowing that mom and dad are together again for eternity.

Funeral service will be held on Thursday, August 27 at 12:00 at Sobering Funeral Chapel with Pastor Bart Coleman officiating. Interment will be in the Zion Lutheran Cemetery at 5:00 pm. Pallbearers will be dad’s grandsons, Kevin M. Lange, Kenny Lange, Steven Greschuk and Travis Knopf.

In lieu of flowers, if friends and family so desire, donations in his memory may be made to Zion Lutheran Church, Box 968, 403 First Street North, Beausejour, MB R0E 0C0.

Offer Condolence for the family of Rudy Herbert Kunkel