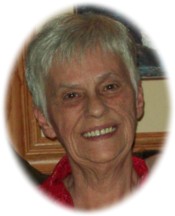 She is survived by her sons Terry Higgins, Christopher Jesseau, Todd Jesseau, Trevor Jesseau and Cory Jesseau, 13 grandchilren and 3 great grandchildren, her brothers Larry, Gordon and Bill and sisters Madonna and Juanita. She was predeceased by her husband Jerry, brothers Peter and Pearce and her mother and father.

A memorial service will be held in Newfoundland at a later date.

Offer Condolence for the family of Sam (Gertrude) Jesseau