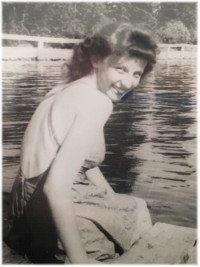 On Wednesday, April 24, 2019, Shirley Hazeldyne (Head) Finkbeiner died in the Pine Falls Hospital. Keeping her alive in our hearts are her daughters, Lorie Finkbeiner and Lisa Botsford Dupler, and grandsons, Jamie, Stephen, and Nicholas (Kailey) Botsford. She was predeceased by her much-loved mother and husband, Earle Head McOuatt and Lorne Arnott Finkbeiner.

Born in Strathclair, Manitoba on November 22, 1929 to Lavina Earle (Halpenny) and Walter Head, Mom spent nearly ninety years living up to her adamant belief that you can do anything you need to do. When she was very young, her father chose death when he could no longer cope with the demands of his life in the Depression. For the rest of her childhood, she and her mother faced the world together as Grandma took jobs housekeeping in Churchbridge and Hyas, making lifelong memories. Strathclair was always home, though, and it was there that Mom met Dad. They married on July 29, 1948 and moved to Virden for their first six years of married life where Mom had her initial taste of being the school principal’s wife. In 1954, they moved to Pine Falls where they made a home, raised their daughters, and lived the rest of their lives.

Mom believed strongly in the importance of contributing to the community in which you live, and she spent most of her life practicing what she preached, working as a CGIT leader with young women who remained important memories to her for years to follow, active in both the United Church Women and the Eastern Star Lodge. After being a stay-at-home mom while we grew up, she then worked in the hospital admitting office, and one of her regrets about retiring was that she never had a chance to work with computers. That didn’t stop her, though, as she bought a computer and learned on her own. For her, retirement wasn’t a time to stop; it was simply a time to work on other priorities. She became part of a group working to raise awareness of domestic violence in our community at a time when many believed things like that only happened in other places, sat as a board member of the Allard Library, and was one of the founders of the Christmas Hamper group. Posted on her desk . . . “Yes, I will be old one day — not today, maybe tomorrow”.

Faith was important to Mom. She spent many years as a regular churchgoer — beginning as a young girl in the Baptist Church until her love of parties and dancing led to her being placed on a prayer list (which delighted her in later years) and then in the United Church until she felt that an internal restructuring had placed her “firmly on the shelf”. But, even after that disillusion, spirituality was strong in her and, as we wandered Ireland and Wales, she often rested her hand on the ancient stone of church or monastic ruins, feeling the energy of centuries of prayer and devotion.

Family was always an integral cornerstone of Mom’s being, and one of the joys of her life was to have everyone all together. First as a mother to two daughters, then as a grandma to the three grandsons who captured her heart from the moment each was born, she thrived on occasions that brought us all together; her love gathered us in. From the home smelling of freshly-baked cookies where all our friends were welcome — to the heart of the family for occasions, large and small — to the special place her grandsons loved to visit, the house filled with a clutter of memories. Mom was the keeper of memories, the teller of stories, and the searcher for knowledge of our history and roots.

We will remember Mom for her unwavering love, her ability to laugh even in difficult situations, her delight at the antics of our ever-present cats, her strong opinions about politics and world events, her love of books and music, the tender heart that cared about homeless people, abandoned pets, wild animals, and abused donkeys. . . and so much more.

In her hospital stays over the past couple of years, Mom often said that she always felt so well cared for. For that, we thank Dr. Ota and Dr. Ketawala, and all the staff at the Pine Falls Hospital who provided compassionate care through the difficult days, both to Mom and to us as well.

Mom’s funeral will be held at 1:00 pm on Wednesday, May 1 at the Pine Falls United Church, with a gathering held in the hall after the service. We will not be wearing black, choosing instead to remember Mom with colours. Please don’t send flowers but, if you’d like, a donation can be made to the Pine Falls and District Health Care Foundation, D’Arcy’s ARC, or a charity of your choosing.

“To live in hearts we leave behind is not to die.”

Offer Condolence for the family of Shirley Hazeldyne Head Finkbeiner