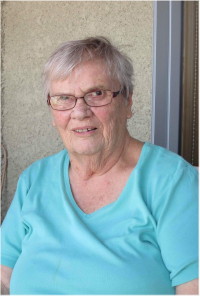 Shirley Jeanette Bell passed away peacefully on November 18, 2020. Shirley was born to Stanley and Minnie Scudamore in Mimico, Ontario on September 14, 1932. Her family had a history of military service through both World Wars and November has always been a season of remembrance for her. It is fitting that her journey also comes to a close in November.

Shirley was predeceased by her parents and by her brothers William, John, Joseph and Bruce. She is survived by her sisters-in-law – Sharon (Bruce) and Ruth (Joseph), her children – Mary-Jane (Peter), Allan (Sandra) and Lorraine (Scott) and her grandchildren – Margaret, David, Calum, Caitlin and Sarah.

Shirley was a long time resident of Pinawa, Manitoba where she raised her family. As her children grew up, she returned to work with the Atomic Energy of Canada Ltd. She was an active member of the Pinawa Christian Fellowship.

Shirley was artistic and enjoyed learning a variety of fibre arts including rug making, needlework, knitting and later in life she learned to quilt. She was proud to make a quilt for each grandchild.

Although she freely admitted that she could not carry a tune in a bucket, she loved to “make a joyful noise” and the radio and music were a constant companion. She hated it when someone switched her radio to the country station – even though it had better reception. She was a loyal CBC listener to the end.

Shirley left Pinawa in 2006 but retained close ties to the community and her friends. Shirley resided in both Winnipeg and Steinbach after leaving Pinawa. As her health failed, she moved to Rest Haven Nursing Home in December of 2018.

The family would like to thank the staff at Rest Haven for their care over the past year.

Cremation has taken place. A memorial service will be planned for when her family and friends are able to gather together.

Offer Condolence for the family of Shirley Jeanette Bell