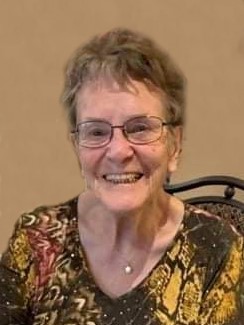 Peacefully, with family by her side on Jan. 29, 2022 Shirley Miller (nee Petterson) passed away at the Victoria General Hospital at the age of 87.

Shirley was born on May 11, 1934, in Selkirk, MB with a built-in sidekick, her twin Eileen. She grew up in Great Falls and spent many summers with family at Beconnia Beach going for rides in the horse and buggy her grandparents had. She met the love of her life in 1956 in Great Falls and married on Sept. 7th, 1957 in Lac Du Bonnet. They were blessed with a daughter Dec. 13, 1958, followed by their second daughter 1 year to the day and a son in 1963. Throughout their lives together, Shirley and Don surrounded themselves with family and friends. Shirley followed Don throughout his 37+ year Hydro career, from Great Falls to Thompson to Gillam and Grand Rapids and finally retiring back to Thompson in 1989 where they spent 12 years until 2000 when they returned to Lac Du Bonnet to live with a river view, Shirley’s greatest dream. They immersed themselves in the community and enjoyed old and new friends. Due to Dad’s failing health, in 2010 they moved to a 55 plus residence in Winnipeg where Shirley resided until her passing. Mom was a quiet lady who embraced everyone. She was a member of the Royal Purple for over 50 years and was an avid bowler, knitter, bingo and card player, a huge fan of curling, the Jets and Bombers.

She was so proud of her family and friends and cherished every chance she had to spend time with her kids, grandchildren, and great grandchildren. Every year in August Mom and Dad took the 3 of us on a one month family vacation and either traveled to BC or had a stay-cation in Manitoba. They often traveled to attend special events for their grandchildren who all spent part of their summers in Thompson to attend swimming lessons. Our hearts are broken but we are so thankful for the wonderful memories she created for each of us.

The family would like to thank the staff on 5 North at Victoria Hospital for their care in her final days as well as Dr. S. Ahmad, Dr. Peshkin and Dr. Dirks for all their care and support over the years.

In lieu of flowers donations in Mom’s Memory can be made to the Manitoba Lung Association or Siloam Mission.

Cremation has taken place and a Celebration of life will be held in the summer. If you would like to be notified of the date and time please email shirleymiller0534@gmail.com

Offer Condolence for the family of Shirley Miller (nee Petterson)