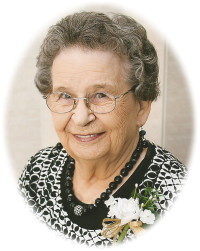 With heavy hearts, we announce the peaceful passing of our dear mother, mère, big mère, sister, sister-in-law, brother-in-law, aunty and friend on April 28, 2015, twenty two days before her 85th birthday.

Ma was predeceased by her husband of 43 years, Joseph (1993), her parents Etienne and Alida Poitras, 6 brothers and 7 sisters.

We would like to thank the wonderful staff at the Pine Falls Hospital for their loving care towards our mom, who always kept her SMILING.

According to her wishes, a Traditional Service will be held on Friday, May 1, 2015 at 1:00 p.m. at Notre Dame du Laus Roman Catholic Church in Powerview. Viewing and prayers will be a half hour prior to service at 12:30.  A private internment will take place at a later date.

Offer Condolence for the family of Simone Lavoie (nee Poitras)