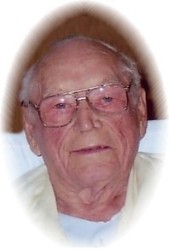 It is with profound sadness that we announce the passing of Stanley Domanski on Tuesday, April 20, 2010 at East Gate Lodge in Beausejour, Manitoba.

Stanley was born on April 25, 1920 to Anna and Anton Domanski in Melrose, MB.

Stanley is survived by his brother Walter Domanski (Verna) and sister Helen Budd (Roy), sister-in-law Rose Cormack (Lloyd), brother-in-law Steve Sawchuk (Betty) and many nephews and nieces. He was predeceased by his wife Adele on March 25, 2010, his mother Anna and father Anton, his siblings Frank, John, Mary, Joe and Julie.

Stanley and Adele were married on June 26, 1954 and made their home in Garson, MB.

Stanley loved to be outdoors, be it working in his garden or tending to the yard. For 27 years, he drove truck for Gillis Quarries and in later years worked as an Ice Man at the Winnipeg Winter Club until his retirement.

Stanley was a member of the Knights of Columbus and one of the founding members of the Garson Community Club. During his time with the community club, they built a wonderful community hall and an indoor skating rink. Stanley was very proud of both of those achievements. Both he and Adele enjoyed working at the fund raising bingos and perogie suppers.

Stanley and Adele loved to bowl and bowled for many years with the Garson-Tyndall bowling league and happily won a few championships. They loved to travel; one of their favourite destinations being Hawaii.

For seventeen years after Adele had her stroke, Stanley devotedly looked after her care, seeing to all her needs with the help of the wonderful people of home care. He was very grateful for their help in lightening his load. He became the homemaker, doing the cooking, cleaning, shopping and laundry, planting of the garden and tending of the yard.

Since January 2009, Stanley has called East Gate Lodge his home. He was very appreciative of the wonderful care and compassion shown to both he and Adele while they were there. How lucky we are to have this wonderful facility. A special and grateful thank you to all of his care givers. You made a positive difference in Stanley’s life.

A celebration of Stanley’s life will be held on Saturday, April 24 at 10:00 a.m. at the Sacred Heart Roman Catholic Church, Garson, MB with Rev. Fr. Charles Fillion presiding. Interment will follow in the parish cemetery.

In lieu of flowers, those who wish, may make a contribution in his name to the Sacred Heart Church in Garson.

Offer Condolence for the family of Stanley Domanski