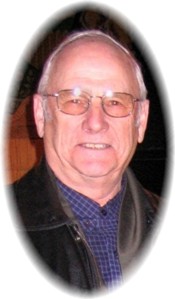 It is with love and fond memories that we announce the passing of Stan Petryk on Friday, January 22, 2010.

Stanley was born on October 24, 1930 at the St. Boniface Hospital. He grew up in the Elma/Hadashville area receiving his early education at Juno, MB. When the family moved to Garson in 1942 he continued his education there.

He leaves to mourn his wife Olga of 52 years, his sister Jane Seniw (John), his sister in-law Margaret Dohan (Don), their children Dan (Nadia) and family, Karl (Tamara) and Kathleen, his brother in-law Roy Smiley, his two nieces Wendy and Donna and husband, Auntie Stella Kapatan and numerous cousins. He was predeceased by his mother and father, sister Clara Smiley and brother Walter and wife Paula.

Stanley delighted in being around people. His health walks in Garson inevitably ended up at Anna’s Restaurant for coffee. His warm smile was always welcome at the regular dances at Howard’s Barn, the friendly bocce ball games, the social outlet of playing cards and the gathering with friends at Beausejour’s Club 50.

His wide range of friends and acquaintances was evident wherever he travelled. Trips within Canada included most of the provinces, with the highlight being a visit to Ottawa to meet with the then Governor General, Edward Schreyer. Whether he was in California, Illinois, Texas, Hawaii or almost any other state, Stanley always ran into someone who would enthusiastically greet him, including an occasional border agent. Trips to Switzerland, Italy, Holland and Germany satisfied his love of diverse food as well as his sense of adventure and learning.

After retirement from CP Rail, to balance his active social life was the contentment of fishing. Easing his boat into the Winnipeg River and peacefully casting his line was a restful activity he relished. The amount of pickerel on the stringer in the end was secondary. Camping and fishing was a passion of his. Many years were spent at Pointe du Bois enjoying the weekends with friends.

Stan was an active member of the Garson Community Club. He was also the President of the Tyndall Ukrainian Church and was proud he and the members succeeded in having the church declared as a heritage building in 2009.

At Stan’s request, in lieu of flowers, donations may be made to the Manitoba Lung Association, 629 McDermot Avenue, Winnipeg, MB R3A 0C8 or the Tyndall Ukrainian Orthodox Church, Box 297, Tyndall, MB R0E 2B0.

Offer Condolence for the family of Stanley Roy Petryk