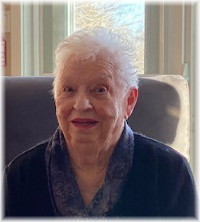 It is with great sadness that we are sharing the news that our darling mother, Stella Dreger passed away suddenly at home on Monday, February 22, 2021 in Lac du Bonnet. She had just celebrated her 87th birthday and she was looking forward to spring and the easing of COVID restrictions to visit with family and friends. Stella is lovingly remembered by her daughters, Dianne McCoy Posner and Joyce Wright (Roy); Dianne’s sons Michael McCoy (Melanie) in Winnipeg; Andrew McCoy (Tammy) in Lac du Bonnet; Joyce’s children, Shannon Trask (Mathieu) in France; Kevin Trask (Tracy) and Stephen Trask (Mel) in Winnipeg; and Dennis’s sons, Jay and Matthew in Montreal; Cole in Halifax and Lucas and Liam in Chile. There are 14 great-grandchildren that will miss her as well. She is survived by sisters Claudette Slobodian, Louise Van Belleghem (Roger) and Lorraine Trudeau (Wilfred) and numerous nieces and nephews. Stella was predeceased by husband Victor Dreger, son Dennis; son-in-law, Craig Posner, parents, Elodie and Leo Allaire; brothers Roger Allaire, Aime Allaire and sister Vivian Nightengale.

Stella grew up and attended school in St. Boniface. She met Victor, a soldier on assignment patrolling the riverbanks around the St. Boniface Hospital during the 1950 flood. It was love at first site and they married in 1951. They spent the next 12 years living the military life, moving to Shilo and Winnipeg; Fredericton and Oromocto, New Brunswick; Hemer, Germany and then back to Winnipeg where Victor got out of the military. Vic became a Firefighter at Atomic Energy of Canada at Pinawa, Manitoba and the family moved to Lac du Bonnet. Stella also began working at Atomic Energy where she began as a bilingual receptionist and retired 25 years later as the Contracts Clerk in Building 412.  She was a trailblazer, deciding at age 50 to pursue a university education ‘en Francais’ and she travelled each week to attend night classes at St. Boniface College. While she endured domestic violence during her marriage, she never gave up on her family and changing that. She was a member of Al-a-Non and she supported other women that were trying to make changes in their lives. She was an entrepreneur, buying and selling property which helped contribute to her life-long dream of building a new home. Vic passed away in 2001 after a lengthy illness, but she went ahead and had their house built on the Winnipeg River. She was a volunteer for a time in the community at the Lac du Bonnet Personal Care Home and at the Adult Day Program. In 2018, she decided to be closer to family and access to health facilities, so she moved to Concordia Village Assisted Living but with the onset of Covid in 2020, she moved back to her home in Lac du Bonnet where she was living with the assistance of her daughters and the Home Care team. Stella was a beautiful and gentle spirit, a role model mother, grandmother and great-grandmother as well as sister who put family first and never gave up on her hopes and dreams.

Heartfelt thanks go to Lisa Kroeker, RNP, Dr. Safie and nurses at Pinawa Hospital, Paramedics as well as Home Care staff, Evelyn, Courtney and Leanne that assisted Mom each week.

A celebration of life event will be held later in the spring. In lieu of flowers, those wishing to honour Stella’s memory may make donations to the Palliative Care program which helped Mom to be at home –  http://palliativemanitoba.ca/supporting-us/

Offer Condolence for the family of Stella Marie Dreger