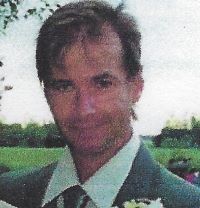 Steven was born November 17, 1962, in Whitemouth, Manitoba. He was born the 4th child of Charlie and Iris (Johnson) Merke.

Steven was baptized and attended the St. Paul Lutheran Church in the small town of River Hills where he lived with his parents and siblings.  He attended Whitemouth School until Grade 10 when he transferred to Lord Selkirk in Selkirk, Manitoba.  He majored in Autobody.

One day, while he was still living at home, he came home from school and parked his truck in its usual space by his Dad’s garage.  The next morning his Mom was off to work, and being on the late side, forgot that Steven’s truck was in its spot and backed right into it!  Good thing Steven was taking autobody.

After graduating, Steven was hired by a contractor who was building and erecting Hydro lines in Manitoba.  Some of these lines were in remote areas and the men stayed in camps.  He was supplied with a company truck to move men and equipment around where they were working.  One day when he was working in the Hamoita area, Steven was travelling down one of the many construction roads when his brakes failed and into a huge rock went Steven’s truck. No worries, no one important was injured.

After leaving the construction company, Steven moved to Beausejour.   Here, he worked as a bartender of Steve’s Sports Bar & Restaurant.  He also worked in other hotels as a bartender.  He met his wife, Gerry, when working at Pappy’s Restaurant in Beausejour.  They dated a bit and later they were married.

As per Steven’s wishes cremation has taken place and no formal service will be held.

Offer Condolence for the family of Steven Merke