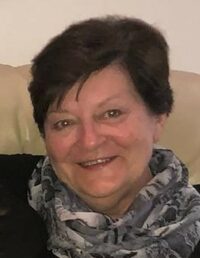 She was pre-deceased by her father Stephen and mother Ethel. She leaves behind her husband Allen of 53 years who she affectionately called Pedro, sons Jody (Lisa) and Chris (Cara), and grandchildren Brooke, Carter, Bethany and Cody.

In the spring of 2015, Terry was diagnosed with a brain tumor (benign). On June 9, 2015, she underwent successful brain surgery to remove as much of the tumor as possible but due to its location, it could not be totally removed. On September 12, 2017, the first of two Gamma Knife radiosurgeries were performed and the tumor was successfully reduced each time. This past year she underwent multiple radiation treatments that targeted the tumor but it was clear to her that it was still growing. On January 6 an MRI was performed but it was inconclusive due to the swelling. A subsequent MRI was performed on March 15 to reveal the extent of the growth and develop a treatment plan. She was scheduled to meet with her doctor on April 8.

Terry was born, raised and proud to be from Beausejour. As a child, she grew up in one of the local grocery stores: Rumak Brothers. The Rumak family was a mainstay in the business community in Beausejour for many years. After high school graduation, she enrolled in Teacher’s College (she wanted to be a nurse, but couldn’t stand the sight of blood) and was immediately hired to her first teaching position in the Winnipeg School Division after completing her degree. Her father (who nicknamed her Spider) passed away suddenly when she was 21, so she came back to help with the family store in the evenings and on weekends while still teaching full time.

She was a beloved and respected educator throughout her 30 plus year career at the Beausejour Elementary School/EBEYS as a classroom teacher and then resource teacher. She firmly believed that all students could learn and be successful members of our community. She cared deeply for all her students and poured her heart and soul into whatever they needed to feel safe and supported. Her knowledge and passion for teaching never waned and the positive impacts she made on both students and staff is a legacy that continues on. Although she retired from teaching in 2001, she continued to make a difference in the lives of so many students by volunteering regularly at EBEYS and Gillis in various classrooms, as well on field trips for her grandchildren. Even though she never wanted to be on the sub list because she didn’t want to take work away from someone, she was always available as an ‘emergency sub’ when the then Principal of Gillis School came calling.

Her family was her ‘everything’ and there was never any doubt that she was the Matriarch of the Wielgosh family. She was always there to help solve any problems or just be a sounding board for anyone that needed to talk. She had a tremendous ability to just listen without passing any judgement but would certainly put her foot down when it was necessary. As a young Mom, she drove her boys everywhere for their sports and summers were spent at ‘the pit’ and Joan’s cabin in the Whiteshell. She definitely loved the water and ensured her boys did as well. From minor hockey to Junior A and beyond, Terry travelled far and wide to watch her boys play hockey and would often re-schedule family gatherings to ensure they didn’t conflict with any sports schedule. She continued to be ‘available’ to drive her boys home from wherever and whenever they needed a ride. Always with a smile and laughter, even in her pajamas. Once in a while, she was even convinced to come in for a drink.

Her grandchildren called her “Amie” which she absolutely loved. Each one of them had the luxury of spending countless hours with her during their early childhoods whether it was because they were sick or just needed a place to be. They never really had babysitters because they had their “Amie”. As they grew up and got part-time jobs; delivering lunch or supper for them on their short breaks from CO-OP or having a hot meal ready for them upon arrival at the house became standard operating procedure. And she loved every minute of it. While she often pulled the ‘Grandmother’s Rights’ card out when she was questioned about all the things she bought and did for them, she still managed to maintain a masterful balance between being a Grandma and a teacher, and never let a teachable moment slip by.

The family would like to thank everyone for their tremendous support and kind messages throughout this difficult time.

The funeral is scheduled for 10:30 am, Friday, April 8 at Sobering Funeral Chapel in Beausejour.

A livestream of the funeral can also be accessed through the CISCO WEBEX app on your mobile phone or visit signin.webex/com/join on your PC. Enter the Meeting Number: 2553 147 6614 and Password: XmnFwiCr473

**Direct access to the Live Stream can be found here**

You may also choose to listen to the service by staying in your vehicles in the parking lot at Sobering Funeral Chapel and tuning your radio to 98.1 FM. There will be an opportunity to receive a memorial card and sign the guest register from your vehicle.

Offer Condolence for the family of Teresa (Terry) A. Wielgosh (nee Rumak)