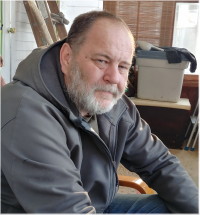 On October 11, 2020, Terry Johnson passed away peacefully at Beausejour General Hospital, bringing an end to his hard fought battle with pancreatic cancer.

Terry leaves behind his beloved wife, best friend, and the love of his life, Kathleen (Berkhoff), adored son Mason and the four legged members of his small but loving family. Brother to Wayne Johnson (Norma), William (Bob) Johnson (Diane), George Johnson and sister Debbie Johnson and loving Uncle to Christopher, Trisha (Barry), Bryan, Pam, Shawna (Scott), Dana, Erica, Danielle, Adam (Keara), and Danielle.  Predeceased by his parents, Edward and Jean (Todoruk), Terry had many aunts, uncles and cousins that played starring roles in his many stories of his youth.  He is survived by his Auntie Lucy Poitras and Uncle Lorne Todoruk (Karen). Terry was blessed with a generous heart, an open mind and a ready laugh, not to mention countless friends with enduring relationships no matter the distance between them. Terry, Dad, Uncle Toots, TJ, whatever you knew him by, he will be forever missed by the loving people that knew him.

Terry enjoyed so much of the life he was given, especially the outdoors, fishing with friends and family, camping and fishing with Mason in Snow Lake or just watching his apple trees grow at his new home in Tyndall, Manitoba.  He particularly enjoyed road trips, including a most memorable one to Whitehorse with his brother Bob. No matter where he was, or what he was doing, he was happiest surrounded by family and friends.

On his behalf, the family would like to express heartfelt appreciation for the many people who went above and beyond this past year to spend time with and or support him with this last battle.  Gord Miller, Kevin Cardinal, brother George, the incredible staff at CancerCare Manitoba, Debbie and the staff at Safeway Pharmacy at Madison Square in Winnipeg, and lastly Amanda at Beausejour District Hospital, thank you all.

In lieu of flowers, donations may be made to CancerCare Manitoba.  A private celebration of life will be held at a later date.

Offer Condolence for the family of Terry Johnson