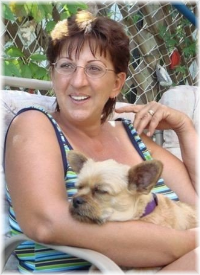 It is with great sorrow we announce the passing of our wife, mother and grandmother Vera Cardinal on July 3, 2019.

Vera was born in Iserlohn, Germany October 22, 1955 and came to Canada at an early age, only to experience the Winnipeg snowstorm of 1966. During Vera’s years in Canada she served in law enforcement in Ontario and Manitoba. Upon meeting Derrick, she dabbled in crafts and made many exquisite decorations for her home and others. On June 24, 1995 Vera and Derrick were married and went on to build a new home in Winnipeg. After four years they decided to relocate and build in cottage country. They built and moved into a new home in the Lee River area, outside Lac du Bonnet in March of 2003. Five years later she ran and was elected to the RM of Lac du Bonnet Municipal Council.

In the new home, Vera spent summertime soaking in her pool, sitting on the back deck watching the hummingbirds for hours and the occasional ride on the pontoon boat. She also enjoyed the odd game of golf and taking the dogs for car rides to get an ice cream. Vera was very fortunate to have been able to travel just about every year that her and Derrick were together and she always made sure the golf clubs were packed in the back of the vehicle. In the early years, tropical vacation and cruises were the escape from the snow. Although she was very fortunate to go on many warm vacations, her favourite vacations were the road trips they took down south through Florida, Texas and Arizona; with Lake Havasu, Arizona becoming her favourite place to be in December and January. She loved walking the Bridgewater Channel, Rotary Park and Grand Island where over the years she was accompanied by her precious dogs (Elmo, Bozlee and Gracie) who now she is going to join once again. Of all things though to do in Lake Havasu, she could not wait for the Hot Air Balloon Festival every January. The “whoosh” of the fire inflating the balloons above her head would put the biggest of biggest smiles on her face.

One of her biggest wishes was filled when Marla met Alana and they were married on September 9, 2016 and seeing the birth of her Grandson Smith on May 10, 2019.

We would like to thank Dr. Bruneau and all the staff at Pinawa Hospital/CancerCare, Manitoba CancerCare and all our friends who have reached out and supported us through this journey.

As per Vera’s wishes cremation has taken place and a Celebration of Life will be held on Monday, July 15th at 2:00 p.m. at Abundant Life Chapel in Lac du Bonnet, 90-4th Street, Lac du Bonnet with Pastor James Schwab officiating.

You are now pain free. Until we meet again.
Love you always and forever.

Offer Condolence for the family of Vera Cardinal