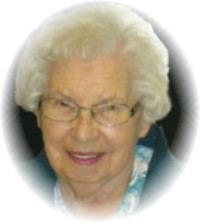 Victoria Buttsman passed away at East Gate Lodge on May 23, 2013 with her family present.  She was born on November 3, 1921 in Beausejour, Manitoba.  She is survived by her daughter Anne and son-in-law Dennis; grandchildren: Karen (Al and daughter Alarey), Kim (Kevin) and Jarrett; great grandchildren: Jordan, Jeremy, Alyssa and her father Scott, Gage and Cassie.  She is also survived by sister Jean Urbanski, as well as numerous nieces and nephews.

Her love of gardening led to many gifts of produce to family and friends. Her perogies will be missed by her family, especially grandchildren and great grandchildren who have always said her perogies were the best in the world, particularly Cassie.  Her great grandchildren called her Chickee which came to be her name from the time her first great grandchild was born, until today.  She called him her little Chickee and when he was old enough to talk he said his name is Jordan not Chickee, and this is how she derived her name as Chickee.

She was always very active in life and could often be seen running instead of walking. She was very involved in the Beau-Head Seniors Club as well as Crime Stoppers, and recognized as a community volunteer.  She loved playing cribbage and very rarely missed a game at either the Beau-Heads or at the Legion on Saturdays.

A sincere thanks to Dr. Nick Van Rensburg, Cindy Bialek, and all the wonderful caring staff at East Gate Lodge, including kitchen staff , cleaning staff and all the angels who were involved in her care.  A very sincere thanks to all her friends and neighbours for their support; they know who they are.  A special thank you to the pallbearers.

Offer Condolence for the family of Victoria Buttsman