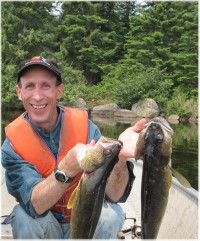 Two months shy of his 50th birthday, it is with profound sadness and the heaviest of hearts we announce Vince’s passing; beloved son, brother, nephew, cousin, and friend. He is survived by his Dad, Wayne (Penny), siblings Shawn (Sheila) and Dawn (Chip), nephew Zack, and niece Emma. Uncle Harry and Aunt Marlene were second parents to him and treated him like their own son. Vince is also survived by a large extended family of aunts and uncle’s, cousins and dear friends, too numerous to mention. He was predeceased by his Mom, Beverly; nephew Aidan; Grandparents, Mary, Bill, Olga and Phillip. Mom’s loss especially impacted the rest of his life and we feel some peace knowing he will be welcomed by the loving embrace only a mother can give.
Vince was raised between Pickle Lake and Oxdrift, ON and later lived between Elma and Hadashville, MB. He graduated from Dryden High School and later received a hard-earned Certificate in Business Administration (Accounting) from Red River College in Winnipeg. He worked at Kurian Forest Products for a couple of years, then spent the last 25 years working between the Tree Nursery and the Fishery for the Province of Manitoba. He really enjoyed the past year at the Fishery and the crew that came with it, considering them a little extended family. He often said he wished he could have spent his entire career there.
Vince’s life can be defined by both his independent spirit and quiet vulnerability. He was never mean or unkind, and it would be an extremely rare occasion he engaged in any kind of anger. From birth, he was always a gentle soul who was quick to offer a smile that made him a fan favourite among family and friends. Vince just wanted to ‘be’ and experience life on his own terms. While his passiveness could infuriate us one moment, you couldn’t help but admire him for it the next.
Vince developed friendships quickly and easily with his chill style that was unique to him. He could remember insane amounts of details and was our walking phone book, address book and calendar. He cared for our Grandparents (and they cared for him) for years, and he enjoyed his time with them.
Vince surrounded himself with people who laughed frequently, and he loved a good story. You can’t remember him without conjuring up memories of his laugh. It usually involved not breathing for what seemed like an hour with his shoulders shaking, and then when he finally came up for air was followed by a squeal and another fit of laughter. The joke or story frequently was lost to the entertainment we would have by laughing along with him.
His ability to find a cozy corner of a couch and vacation there was legendary. He wanted nothing more than to just exist in the warmth of family and friends, like one would enjoy the embers of a fireplace. Then, like a feather in the wind he would be gone until the next time he blew in and softly landed for a few laughs, a few drinks, food and companionship. He enjoyed working, his home and his freedom. He found refuge in the cabin at Falcon Lake and loved being outdoors there.
Vince was intensely private about what he shared with the world because he did not want to be judged or have opinions forced upon him. Like the rest of us, Vince was human; he struggled. For his entire life, Vince overcame challenges on a daily basis than most of us can’t imagine, that would bring many of us to our knees with far less grace. Pain would be etched into his face as he endured it. So too will the loss of Vince be deeply etched on our hearts, forever.
Rest with peace, Vince. If love alone could have saved you, you never would have died.
Funeral Liturgy will be held on Saturday, October 3, 2020 at 10:30 a.m. at Sobering Funeral Chapel, 1035 Park Ave. E., Beausejour, MB.  Due to the current restrictions attendance will be limited to 50 people indoors.  There will be room for 100 people to remain in their vehicles in the front parking lot as the service will be broadcast over our outdoor speaker system. A larger graveside service and reception will be held once we are able to gather again. Vince’s world was people…  We realize that not all can attend at this time.  We would like to thank you all for the outpouring of support.

Offer Condolence for the family of Vincent Stuart Lovenuk