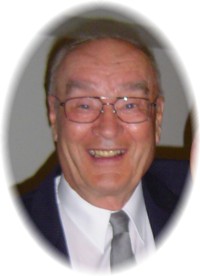 It is with deep sorrow that we announce the passing of Walter Kretchmer; husband, father, grandfather and great-grandfather at Pinawa Hospital at age 86 after a valiant battle with stomach cancer.

He is lovingly remembered by his wife Esther; son Tim (Wanda) of Blumenort, daughters Lori of Edmonton and Diana of Regina; grandchildren Sonya (Greg), Chad (Jolene), Ryan, Erin (Lucas) and Brooke; and great-grandchildren Tyson, Darius, Shelby and Tristan. He is also survived by his sister Betty (Alvin), sister-in-law Florence as well as nephews, nieces, relatives, friends and neighbours. He was predeceased by his parents Edward and Amelia Kretschmer, brother George, brother-in-law Gabe Durocher and nephew Guy Durocher.

Walter was born on Aug. 5, 1925 in Winnipeg, MB. He grew up in Seven Sisters Falls and also resided in Great Falls and Lac du Bonnet. Walter worked for Manitoba Hydro for forty-two years. He retired as an operator technician in 1988.

Walter was committed to his dear wife Esther. They would have celebrated their 60th Wedding Anniversary on September 20. He cherished times spent with his children, grandchildren and great-grandchildren and was dedicated to his church and community. Although he was a private man, he delighted in reaching out to family and friends.

The family expresses their sincere thanks to Dr. Bruneau and staff at the Pinawa Hospital for their compassionate care as well as the Palliative Care Team.

Funeral Service was at 10:00 a.m. on Saturday, September 10 at Sobering Funeral Chapel in Beausejour, MB.

Donations may be made in memory of Walter Kretchmer to Whiteshell Baptist Church Building Fund or to a charity of one’s choice.

Offer Condolence for the family of Walter Kretchmer