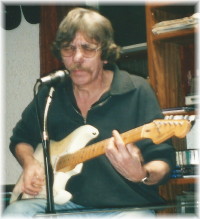 Wayne passed away peacefully at the age of 76.

Wayne is survived by his sisters, Sharon (Rene) Luder and Donna Kisiloski, brother Robert and numerous nieces and nephews.

He was predeceased by his parents, Wilfred and Theresa Boivin; sister Joan; and brothers, Wilfred, Brian and Richard.

Wayne’s stage name was Bobby Ray and he spent over 35 years playing music all over Canada.  While playing at a venue in Winnipeg called The Town and Country, he played along side musicians Dion, Buddy Holly and Del Shannon.  Wayne was also featured on a TV talk show with Ray Torquette in the 1970s.  Wayne self-taught himself the guitar and was an exceptional singer and musician.  Music was his passion and Elvis was the King.

Wayne finally went to Toronto where he lived for over 20 years.  After the death of his mother, Theresa, he decided to move back to Winnipeg to be closer to his family.  While in Winnipeg, his passion for music never stopped.  He taught music lessons to kids that were not fortunate enough to be able to pay for lessons.

Wayne spent many weekends at, sister and brother-in-law, Donna and Gary’s home in Tyndall with family and friends playing music.  The laughs and the good times will be greatly missed, but as Wayne would say, “Elvis is the King” and “Rock and Roll will never die.”

Cremation has taken place and a family interment at Chapel Lawn will take place at a later date.

Offer Condolence for the family of Wayne Allen Boivin